Thornton & Neely's Take on Fighting, and if it were banned 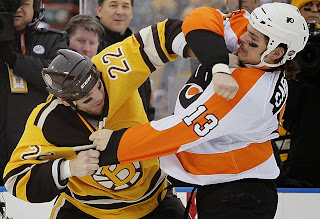 Boston fan favorite Shawn Thornton, and President Cam Neely were interviewed by ESPN.com, regarding the effect that fighting has on hockey, and the possibility of it being removed.

Here are the interviews, courtesy of ESPN.com:

Beginning with the Shawn Thornton interview:

DO YOU GET THE SENSE THE TIDE IS TURNING ON FIGHTING?

"I don’t know. Yes and no. I think that whenever an incident happens, I think people are a lot quicker to jump on the, I don’t know what to call it, whether it’s pedestal or bandwagon or I don’t know which way to go about it, but the anti-fighting people are a lot more vocal after an incident happens. For instance, when my buddy [George] Parros slipped and hit his face on the ice, people were saying that’s why we have to get rid of [fighting in] hockey. People slip all the f------ time. I don’t know the numbers so I probably shouldn’t [say] but I think a lot more concussions are happening from head hits than fighting, but any time anyone gets punched in the face and gets hurt, people jump all over it. I think there’s an agenda. I’m not sure where it’s coming from. I won’t say it’s changing the tide, but I think there’s definitely more of an agenda nowadays."

FOR EXAMPLE, THE RAY EMERY-BRADEN HOLTBY INCIDENT ...
"And goalies are a whole different animal. You know, who’s the goalie going to go after? It’s a little bit different from my job. It’s a unique situation that’s happened, what? Twice in the last 15 years. People make a big deal out of it. It’s not a recurring trend. It happened. It’s an incident but it happens once in a blue
moon."

DOES THE CODE STILL EXIST? IS THAT SOMETHING YOU TAKE PRIDE IN/ABIDE BY?

"I take a lot of pride in that. I do. People could probably criticize that I’m a little too honorable, I suppose, in some instances. I've been a firm believer my whole life that what goes around comes around. If you’re one of those guys that suckers someone when they’re down or you go after somebody that doesn’t deserve it or isn’t the same category as you, that will come back and bite you at some point, too. I also take a lot of pride in the fact that I can play 8-12 minutes a night. I’ve had to work extremely hard on that part of my game to bring more to the table than just fighting. That’s part of my game, but I can do a lot more."

WHAT ABOUT TOUGH GUYS WHO CAN ALSO PLAY VS. GUYS WHO CAN'T?
"It’s tough. I’m a different situation because I worked on my game in the minors for nine years before I made it in the NHL. Had I been in the NHL as a 22-year-old, I probably would’ve been one of those guys working on my game trying to get to where I am now, but it would’ve been on the NHL level. It’s tough, I used to be that guy that was the grocery stick on the bench and went out and had to sort things out. If they got rid of those guys, I wouldn't be here either, so I think it’s different case-to-case. Some guys are very comfortable with just being that guy, some guys will want to improve and contribute in other ways."

DO YOU THINK THERE IS AMPLE SUPPORT FOR FIGHTING AMONG THE PLAYERS?
"Definitely, with the players. The players don’t want it to go anywhere."
Bruins President Cam Neely also discussed his thoughts:

WHAT WOULD THE NHL LOOK LIKE WITHOUT FIGHTING?
"Listen, I respect everybody's opinion about our game, but it's a little different when you’re on the ice and you have a stick in your hand. That’s the thing that’s different than any other sport is what you can do with your stick, maybe a little bit behind the scenes. It’s hard to say, but my guess is stick work will pick up and there will be a lot more guys that’ll be a little braver, a little tougher."

DO YOU GET A SENSE THE TIDE IS TURNING AGAINST FIGHTING?
"Listen, I don't believe in staged fights, I don’t like them, never have. I don’t believe in a fight resulting because of a good, hard, clean bodycheck. You see that a lot and I don’t understand that either. I can understand if somebody hits somebody in a position they shouldn’t, but when it’s a good, clean, hard bodycheck, there shouldn't be a need to come over and protect your teammate. The player that gets hit should take the number, like the old days, just take the number of the truck that just hit you. I still believe there are things that happen on the ice that you want the other player to be held accountable. Two minutes in the box, and I’ve heard some people say, "Well, a good, clean, hard bodycheck will do the number." Well, it won’t do the number. I still believe there’s a place in our game for it. I think it’s a skill set that there are players out there that can play, but also have that intimidation factor that if they get pissed off and drop their gloves, it’s going to make an impact on the game. "

WHAT WOULD FANS THINK IF FIGHTING WAS BANNED? 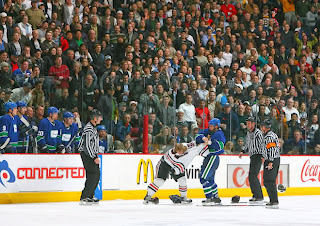 "My guess is the majority of the fans like it in our sport. We all know the risks. The players certainly know the risks. Any player that laces up their skates knows the risks of playing the game. Our fans, I think, love the physical part of our sport, whether it’s a good bodycheck or a fight that resulted from two guys being upset with each other. I have no idea if they were to take it out what the reaction would be from the fans."

How do you feel about fighting in hockey?