Bruins vs Habs: keys to the game 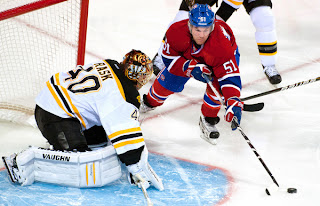 Its time for one of the best rivalry games in sports. Its time for another Bruins vs Canadiens show down, the first of the season. So gather your friends, or your family, or maybe just stay away from everyone in general. Because its time for some Bruins/Habs hockey.

Here at Bruinslife we have been trying to pump this game up all week. But really, it does that itself. Bruins fans know what to expect, and so do Canadiens fans. Its that one game where it almost feels good to hate because we all hate the Canadiens that much. They hate us that much too.

Of course though there is a tremendous amount of talent to look forward to on both teams. From goalies, to defense, to offense, the Bruins and Canadiens are evenly matched. Where they differ though is style. The Bruins are tough and physical bullies while the Habs are small, fast, and skilled players. Its what makes the rivalry that much more intense.

1) Big vs Small. As I stated before the Habs are small and fast and the Bruins are tough and big. Its the strategy they each have taken. The Bruins are good with intimidating the Canadiens skaters but they have gone out of their way to try and bolster the strength of their line up. This off season they acquired enforcer George Parros and last off season, tough guy Brandon Prust. Both the guys have 5 fights on the season and now the Habs finally have guys who can protect them. And guys for the Bruins to target.

2) Less Ice Time For Chara: Chara is the corner stone of the Bruins defense. Probably nothing more strikes fear into the hearts of Canadiens players than seeing Big Z. But the 6'9 defensemen is 36 years old. The Bruins need him to be ready for the playoffs and they can't afford to have him fatigued and sloppy. Its also safe to assume that in Montreal, Chara will be the number one target for Habs skaters who remember the Pacorietty hit.