Coming out of the room from the first intermission down 1-0 and less than two minutes into the second period, the Boston Bruins had taken a rarely seen penalty, given up the resultant power play goal and then a blue line bomb just a minute later and was forced to replace their goal tender.

Things looked pretty bleak for the black and gold, even by Tinseltown standards.  But just like in Hollywood where presence is everything, the Bruins rode the change in script and rode their understudy between the pipes and answered the casting call. 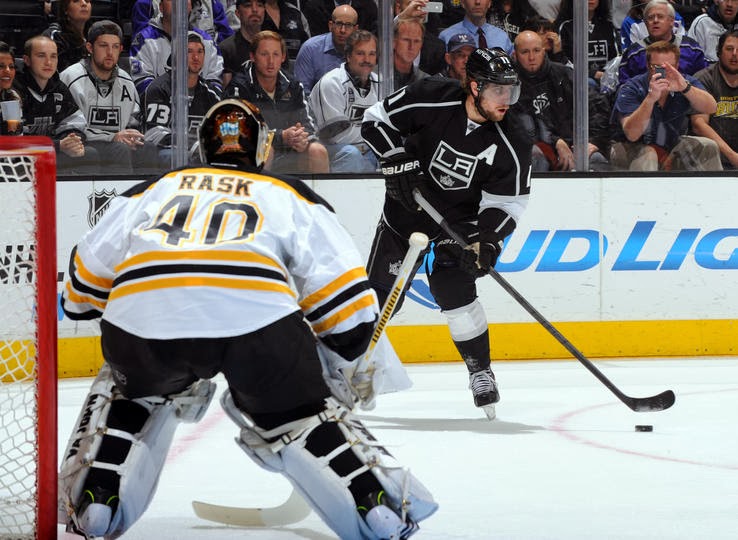 But would it be enough for the storybook ending, or had the Bruins dug themselves a hole too deep to escape from?

Down 3-0 to the Los Angeles Kings and floundering, Bruins' coach Claude Julien lifted starting netminder Tuukka Rask in favor of reserve goalie Chad Johnson in an attempt to stir the pot, but it wasn't until defenseman Dougie Hamilton picked off a pass in the neutral zone and fed Carl Soderberg who found a streaking Matt Fraser for a drought-breaking one timer that awakened the bear from hibernation.

Fresh off of a very public flogging at the hands of the Anaheim Ducks, the Boston Bruins on Thursday night looked initially like they were still feeling the sting of the whip.  The Kings owned the neutral zone and got full value from their time in the attacking zone, getting to the pucks first, their big bodies winning battles along the boards...

...but the Fraser goal midway through the second period stopped the bleeding and leveled the playing field, suddenly the Bruins were skating faster, challenging at the blue line and getting to the boards quickly - and when Kings' brute left wing Kyle Clifford decided to take a run at David Krejci with four minutes left in the frame, Adam McQuaid took Clifford to task.

Both fighters took as good as they got, but the bout seemed to spark the Bruins even more - but the Kings never lost their rhythm, didn't panic and stayed fundamentally sound, weathering the Bruins' push with spectacular work in net by Jonathan Quick as Los Angeles took a decisive 4-2 victory over Boston on Thursday night at the Staples Center.

Quick faced just 22 shots on goal as the stifling Kings' defense dominated the middle of the ice for much of the contest, and Los Angeles got goals from Jeff Carter, Justin Williams, defenseman Alec Martinez and captain Dustin Brown to raise their record to 27-13-5.

The Bruins managed just the Fraser goal and a late Justin Florek redirection but got solid crease coverage by Johnson, who stopped 16 of 17 after replacing the ineffective Rask who gave up three of the goals on 15 shots.  The loss drops the Bruins to 28-14-2.

The Kings took the early lead in the opening frame when Johnny Boychuck whiffed on a clearing pass, Anze Kopitar swooped in and tapped the puck to the red line where he found Jeff Carter in the low slot - taking two shots at Rask from point blank, his first shot stoned by Rask but the rebound jumped right back to Carter and the put back found twine - and the Kings had a 1-0 lead.

The bottom fell out at the start of the second period, Boston starting the frame a man down with Hamilton in the box for a tripping penalty carrying over from the opening frame, but when coming out of the penalty box played a stray puck before fully removed, Hamilton called for the rare interference penalty coming out of the bin...

...Justin Williams scoring just seconds into the resultant power play, gathering in a puck in the neutral zone and beating the defense to the slot - unleashing a rocket that beat Rask easily for a two goal lead, then Defenseman Alec Martinez fired a bomb from the high point just one minute later and suddenly the Bruins were down three and Rask was done for the evening.

So the Bruins take their second bad loss in a row on their swing through California, fortunate that the teams chasing them in the Atlantic Division, the Tampa Bay Lightning and the hated Montreal Canadiens couldn't make up any ground, both remaining just two point back of Boston.

The Bruins now head north to San Jose, where the Sharks lurk to take their bite out of the Bruins on Saturday night.