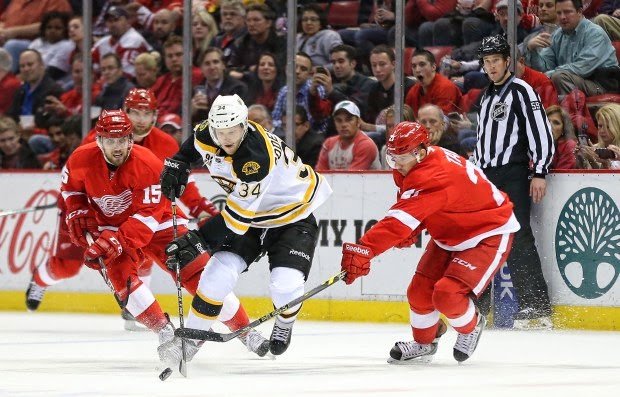 The Detroit Red Wings have made the playoffs for the 23rd year in a row which is the longest playoff streak in all four major sports. The Bruins on the other hand have played the most playoff games out of any NHL team in the past three years. It's going to be a great series against two veteran playoff teams.

Keys To The Game
1) Offense vs Defense: The Wings are a very skilled team with players like Datsyuk, Nyquist, and possibly Zetterberg. The Bruins are one of the best defensive teams in the league. But the defense has its gaps, with injuries and young defensemen, the Wings are defenitely going to attack the Bruins weaker d-men like Meszaros and Hamilton. It'll be up to Chara and Boychuck to help the kids out.

2) Howard Is Detroit's Best Hope: Jimmy Howard, the U of Maine alumni, has had an off season by his standards. How he plays in the playoffs is going to greatly impact the outcome of this series. If he can quell the scoring capability of the Bruins top three lines than Detroit has a better chance to win.

*Paille and or Kelly may miss tonights game. The Bruins are keeping quite about it.