Rally comes up short, Bruins fall to 'Leafs in OT

Both the Boston Bruins and the Toronto Maple Leafs had streaks snapped in the 48 hours prior to their contest against each other at the Air Canada Centre on Thursday night.

The 'Leafs happily pried an eight-game monkey of their backs Tuesday night with a 3-2 victory over the Calgary Flames - in the process halting a free fall from the Eastern Conference playoff race that has them on the outside looking in at current eighth seed Columbus with five games to play... 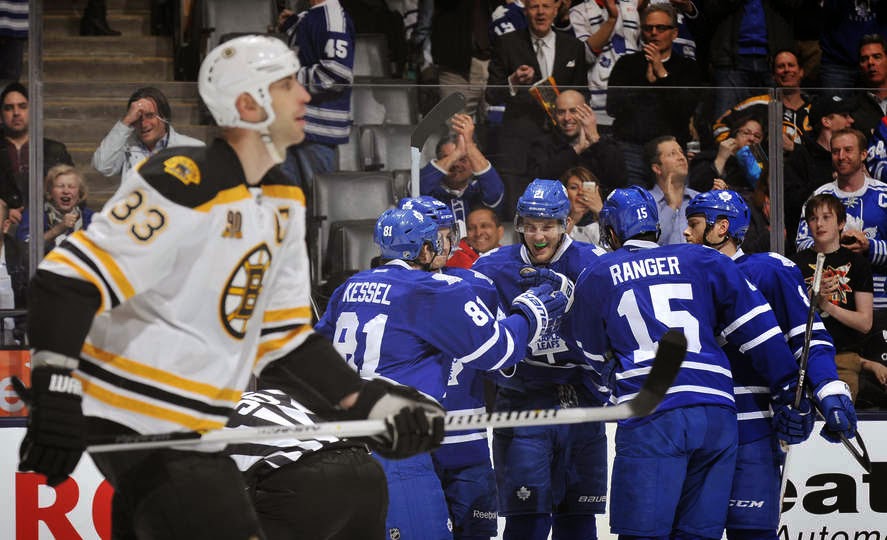 ...while the Bruins needed a doggy bag to hold the broken shards of their many streaks, including a three game winning streak and an amazing 16 game point streak in which they posted a 15-0-1 overall record - all courtesy of the Detroit Red Wings and some sloppy play along the blue line.

So the Toronto Maples leafs came into Thursday night's game coming off a victory to build on, while the Bruins come in downtrodden with a dark cloud hanging over their collective head - not merely due to losing one game in their last 17, because that would be the epitome of narcissism, but because their defense suddenly has more holes than a bowl of fruit loops.

And that trend continued against the 'Leafs, but it took a Nazim Kadri power play goal midway through overtime for Toronto to pull out the must-have game that kept them on pace with the Blue Jackets, still just one point behind - but the Maple Leafs' 4-3 win may be too little-too late as Columbus has two games in hand.

...the three goals seemingly plenty with Jonathan Bernier in net, as Milan Lucic joined Brad Marchand as the only Bruins potting goals against Bernier until he was forced to retire midway through the third after suffering a lower-body injury, and then Patrice Bergeron planted the equalizer against James Reimer to force free hockey, setting the table for Kadri's heroics.

The Bruins entered the third period down by a score of 3-1, Ranger's backhander six minutes into the contest started the scoring - followed less than a minute later when a Marchand blue line theft of a Cody Franzen clearing attempt led to a drive from the right circle that knotted the score at one...

...Bozak breaking that tie by redirecting a Phil Kessel shot that was headed wide across the crease to end the opening frame - both Bozak and Kessel accomplices on van Riemsdyk's goal less than a minute into the second, Bozak causing a turnover by charging hard on Dougie Hamilton behind the net, Kessel pulling in the loose puck and feeding an uncovered van Riemsdyk to give the 'Leafs a two goal lead that they took into the third.

The score stayed that way until Lucic rattled one in past Bernier from the high slot five minutes into the third frame off a pretty feed by David Krejci from behind the Maple Leaf's net - but Bernier wasn't around to see to see Bergeron tie the game at 3-3 when Marchand hit him in the high slot with a pass from the right circle and the Bruins' alternate captain buried the wrister past Reimer.

With the game in overtime, Bruins' defenseman Torey Krug took a holding penalty and Kadri ended the game halfway through the man advantage, snapping in a rebound from a Franzen drive from the left wing to earn the extra point.

In the past four games since a 3-0 shutout of the reigning Stanley Cup Champions Chicago Blackhawks, the Bruins have surrendered more goals -12 - than they had the previous ten games combined, and for the second night in a row, they couldn't overcome the sloppy defense.

All is not lost in Beantown, however, as the Bruins still have an eight point lead over the Pittsburgh Penguins for best record and home ice advantage in the Eastern Conference for the playoffs - a title that they can clinch with a win over the Philadelphia Flyers on Saturday afternoon in Boston...

...while the Maple Leafs might have to settle for beating the Bruins as their consolation prize, because eighth seeded Columbus has the two games in hand and after Toronto hosts the Winnipeg Jets on Saturday, they hit the road for three straight to end the regular season, visiting Tampa and Sunrise, Florida before heading to Ottawa to take on the Senators to close out the year.