Top dogs: 5-2 win over Philly clinches #1 seed in the East for Bruins

It took a bit of time and some extra effort, but in the end, it was always going to be Boston's afternoon.

The Bruins smashed the Philadelphia Flyers in their penultimate home game of the regular season, beating the Flyers for the second time in less than a week 5-2 behind goals from David Krejci, two from Milan Lucic, Johnny Boychuck and Chris Kelly. 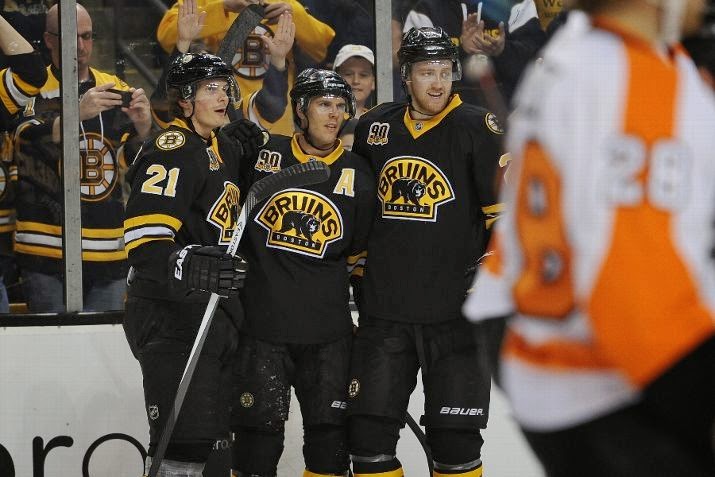 Tuukka Rask turned aside 26 Flyers shots to pick up his 35th win of the season.

When the Bruins played in Philly last Sunday, the Black and Gold gave up their highest shot total all year, letting the Flyers rip off 52 shots on goal.

Saturday, Boston cut that number in half and flipped the script, outshooting the Flyers to the tune of 42-26.

And as we've all come to expect from a Flyers/Bruins matchup, the bodies were flying right from the get-go, and it was Milan Lucic and Zac Rinaldo who got the juices flowing. Rinaldo checked Lucic at the blueline with a huge hit, and Looch wanted to throw down with Rinaldo, but the Flyers agitator didn't engage.

A little more than halfway through the period, Shawn Thornton dropped the gloves with Jay Rosehill and the two got their five-minutes worth from the bout.

It was David Krejci who finally broke through and opened the scoring on the day with his 17th of the year at 15:56. The play was born from Zdeno Chara springing the breakout from the Bruins' zone and finding Krejci in the neutral zone. Krejci found Loui Eriksson in the zone who rifled it on net. The ensuing scrum in front of the crease allowed Krejci to sneak off to the side of the net and find the lose puck to beat Ray Emery.

Boston held the lead through the second period until the Flyers tied up the game on their third powerplay of the day. Wayne Simmonds put home a rebound puck off the end-boards to beat Tuukka Rask at 14:36 Mark Streit shot the puck wide from the blue-line and the ricochet went right to Simmonds who meandered a bit and found the angle to get it by Rask.

But the lead didn't last long, as just 19 seconds later Milan Lucic blasted his 23rd of the year right by Emery to put the Bruins back ahead by one. Doug Hamilton pinched in from the blue-line, which allowed David Krejci to swing the puck around the back of the net and find the open Lucic streaking down the middle of the ice. Lucic one-timed the pass and blew it past Emery in a crowd.

But the Flyers came back through the offensive genius that is Jay Rosehill. Rosehill scored his 2nd goal of the year and his 5th in his career (yeah) to tie the game at 16:21. Torey Krug chased Micahel Raffl and left his spot in the zone, leaving Rosehill with the open real estate to pull a surprise move on Rask and slip it under his pads for the goal.

After a slow start, the third period turned out to be just as wild as the end of the second, as the Bruins flexed their muscle and put three more goals past Emery and the Flyers to seal the win and clinch the best record in the Eastern Conference.

Johnny Boychuck scored the game-winner at 13:54 directly off a face-off win by Patrice Bergeron. Boychuck unleashed a knuckler that whistled past Emery for Johnny's 5th goal of the year. Bergeron recorded the lone assist, and in doing so extended his point-streak to an incredible 11 games.

Milan Lucic scored his second of the day and 24th of the year just 31 seconds later, shooting a puck on net from near the blueline where it deflected (maybe) off David Krejci, but it's still Lucic's goal at this point in time.

The Bruins had the Flyers in the jaws and they would not let them go for the rest of the day. A Claude Giroux slashing penalty gave the Bruins their only powerplay of the game, and although they didn't score on it, they sure made it quite a spectacle to see. The Bruins spent the entire 2:00 and ripped off five shots trying to get another score on the board. By the end of it, the Flyers were gassed and on the ropes.

Chris Kelly sent the Flyers home packing with the empty-netter at 19:39 and sowed up an entertaining day at the Garden. It was Kelly's 9th goal of the year.

The win gives Boston 53 on the year and 113 points. Those totals have officially clinched the overall seed in the Eastern Conference for Boston. The East playoffs will go through the TD Garden.

After taking Philadelphia's best punch for 40 minutes of play, the Bruins reared back in the last 20 and smashed the Flyers to propel them to the win. The top line of David Krejci, Milan Lucic and Loui Eriksson combined for nine points (3 goals, 6 assists). With Jarome Iginla taking the day off for another maitenence day, Loui Eriksson had a tremendous day in his place skating alongside Krejci and Lucic.

The Bruins are off until Tuesday when they travel to Minnesota to take on the Wild. There are just four games remaining in the regular season, and three of them will take the Bruins on the road to the aforementioned Minnesota, Winnipeg and New Jersey.