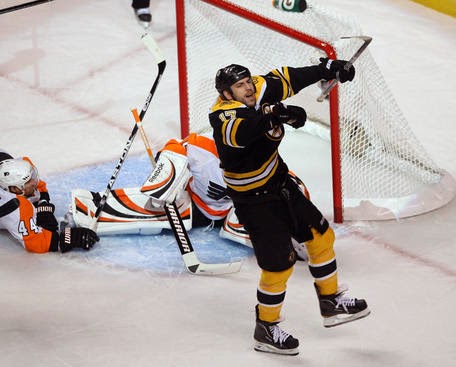 The Bruins are back in Boston to play some matinee hockey against the Philadelphia Flyers. Today the Bruins are also giving out the 7th player award. Some hopefuls are Carl Soderberg, Reilly Smith, Chad Johnson, Torey Krug, and Kevan Miller.

But back to the game, and to the Flyers, who are still holding on to a playoff spot. Every win is important for teams like the Flyers this late in the season and they know it, which is why they are going to play with the energy of a playoff team.

Key To The Game
Defensive Struggles- It hasn't become a big deal yet, but in the past two games the Bruins have made some mistakes and struggled defensively. Now I don't want to point any fingers, Bartkowski, but this is a preliminary for the defensive lineup in the playoffs and some guys need to step up their game.