Seidenberg: "I'll be better than before." 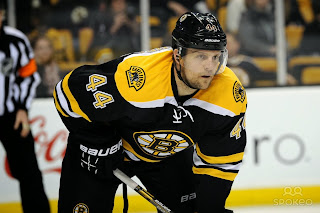 The Bruins return to the ice this fall will mark the return of veteran defenseman Dennis Seidenberg, who, as we all painfully remember, missed the majority of the season with a torn ACL/MCL in his right knee. Seidenberg, who was just on the brink of return when the Bruins lost Game 7, will now have the entire off-season to bring his game to a whole new level.

After being taken away from the game with such a severe injury, Seidenberg is determined to come back on a better note than when he left, when that time comes this fall.

“I’ll be better. I’m confident I’ll be just as [good], hopefully better than before,” he said when asked about next season. “I mean I feel conditioning wise [the knee] is great. I’ve been doing lots of cardio over the last few months. Strength-wise it’s the same . . . pretty good. There’s still a little pain, but that’s just stuff you can deal with, and once you play you don’t think about it.”


When the start of the 2014-2015 season begins, the pain in Seidenberg's knee should be all but gone, leaving the veteran defenseman to return to his reliable game.

The German Hammer will be back in action.

NOTE: VOTE FOR PATRICE BERGERON FOR THE NHL15 COVER HERE
OR TWEET USING #NHL15Bergeron TO CAST YOUR VOTE

quotes via Joe Haggerty of csnne.com