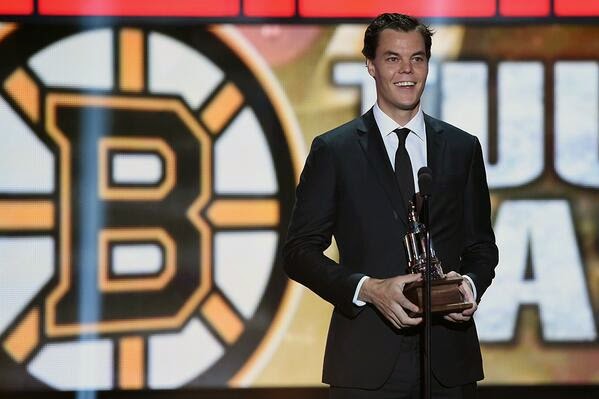 It was a good night from Las Vegas, California for the Boston Bruins. Boston saw two of it's most cherished players, Patrice Bergeron and Tuukka Rask, take home some hardware from the NHL Awards.

Patrice Bergeron was the man of the night, wracking in two awards, and winning the EA Sports NHL15 cover vote as well, beating out Montreal's P.K. Subban to do so. Bergy took home his second Frank Selke Trophy (given to "the forward who best excels in the defensive aspects of the game,") in three years last night, beating out LA's Anze Kopitar and Chicago's Jonathan Toews. Bergeron recieved 1,283 voting points, including 112 first-place votes, out of the 137 to vote.

“It’s a tremendous honor, for sure,” Bergeron said of the award. “The Selke, it’s just an honor to be up against players like Jonathan [Toews] and Anze [Kopitar]. Hockey is such a team sport that I’ve got to give that award to all of my teammates, so honestly it’s an honor, but it really is about all teamwork.”


This of course, wasn't much of a surprise, as most people anticipated that Bergy would take the award without much of a fight. This was a very justified idea, and the Assistant-Captain's stats back it up. Bergeron helped the Bruins to the best defensive record in the Eastern Conference, and the second best in the league, while winning a league-leading 1,015 face-offs, the most by any player in the past seven years. Bergeron led all Bruins in average shorthanded ice time, with 1:57, and ranked second in the league in plus minus, with an astonishing career-high of +38. If there's a defensive-minded forward in the game, it's Patrice Bergeron.

Bruins GM Peter Chiarelli was very happy for Bergeron, and shared his thoughts about the beloved two-way forward:

“Bergy, he’s carved his niche as a two-way forward and sometimes they fall through the cracks when it comes to media recognition. He’s obviously coming to the forefront, so I feel good for him. He deserves it.” 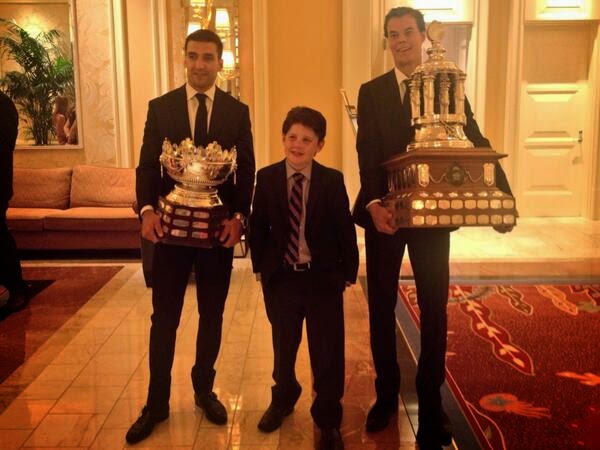 But Bergeron's accomplishments from last night didn't stop there. Bergeron, a champion on the ice, is also one hell of a dude off the ice. Last night, Patrice was honored with the 2013-2014 NHL Foundation Player Award, which is given to the player who "applies the core values of hockey -- commitment, perseverance and teamwork -- to enrich the lives of people in his community." The NHL donates $25,000 to a charitable organization chosen by the winner. Bergeron selected the Boston Bruins Foundation, which assists charitable organization that enhance the quality of life for children all cross New England.

Begeron recieved this award for the amazing work he has done with the community, most notably with his own program, Patrice's Pals, which brings patients from local hospitals and other organizations to see a Bruins game at TD Garden as VIP guests. The kids get to see the game in the Patrice's Pals luxury suite, and even get special recognition on the Garden HDX Scoreboard. To top off the experience, each kid gets to meet Bergeron, and receives a special goody-bag with Bruins memorabilia.

“I’ve met so many amazing young kids,” Bergeron said, of the community service award. “It’s an award that’s really close to my heart, and I’m really proud of that.”

Meanwhile, Tuukka Rask also made a splash last night, taking home his first Vezina Trophy, which is awarded to the best goaltender of the year, as selected by GM's around the league. Rask recieved 130 voting points, and was the top choice of 16 of the 30 GM's that voted.

The Boston net-minder had a fantastic season, posting a 36-15-6 record, and was the only goalie in the league to rank in the top five in each of the league's major categories, including shutouts (7, first place), goals against average (2.04, fourth place), save percentage (.930, second place), and finished fifth in wins.

Tuukka's acceptance of the award was almost as entertaining as the show he put on all season long, as he was clearly nervous to make his speech.

“I’m still kind of shocked that I can’t really even answer any questions,” he said. “It’s a great honor, There’s so many good goalies in the league that 10 guys could have easily won it, and they picked me.”  “You dream about winning the Stanley Cup, you don’t really dream about winning these kind of trophies, but it’s a pretty good feeling though,” he added.


He said that he was more nervous for the acceptance speech than he had ever been for a game. Peter Chiarelli, like the rest of us, got a good laugh out of the ordeal.

“It was actually pretty comical. We’ve all seen him in nets and how kind of ice cool he is. Let him be nervous here, and then when we get on with the season he’ll get back to normal.”


That being said, Chiarelli is proud of his boys, including Zdeno Chara, who finished second in Norris Trophy voting.

“It’s rewarding for the organization when these guys get these awards. You look at how the Kings won and they’ve got a lot of the same stuff,”Chiarelli said. “They’ve got some selfless guys that want to win, and we’re the same way. We try and find those players, we try and coach those players, develop those players. Tuukka, Bergy, Zee, they’re three of the most humble guys that you’ll know." 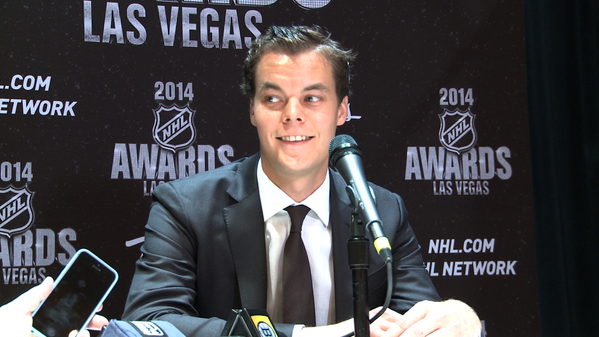