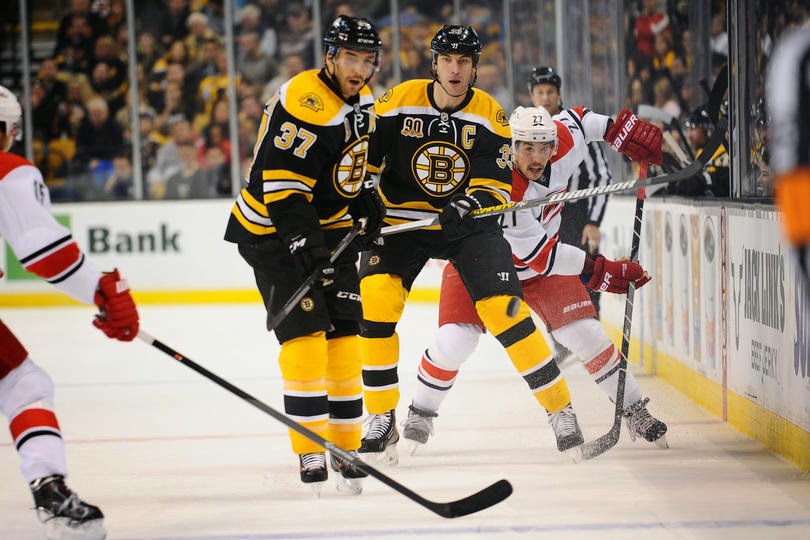 The puck drops tonight on the 2014-2015 NHL regular season, and the first nationally televised game will feature the hometown Bruins against the Philadelphia Flyers.

As has been the case over the last six or seven years, there is a lot of hype surrounding the Bruins, and rightfully so. They still boast a deep core, one of the top defensemen and goaltenders in the game, along with probably the most underrated player in the league in Patrice Bergeron.

Over the last couple of seasons, the Bruins have been a lock to win the Northeast/Atlantic Division, which they’ve done more than once. Many media members and fans alike are picking them to win the division again this year, with some even saying that they should run away with it.

Right now, I’m not so sure.

I am in no way saying the Bruins aren’t going to be a good team and that they aren’t going to win the division. They may have a few more AHLers on their opening night roster than I would like to see, but at the end of the day, not one person is denying that this is going to be a good team. I do think when it’s all said and done they will win the division, it just won’t be a cakewalk at all.

We know what they’ve lost so we don’t need to revisit that. While the Bruins didn’t do much to improve the team, the Canadiens and the Lightning got better.

The Canadiens added some goal scoring P.A. Parenteau and some toughness in Manny Malhotra. As is usually the case, Montreal is the biggest threat to the Bruins this year. Players such as Dale Weise and Mike Weaver, who gave the B’s fits in the playoffs last year and they’re back, too.

Do I even need to mention P.K. Subban, Tomas Plekanec and the rest of the top-tier players on that team?

Not enough people are looking at the Canadiens as a serious threat, but they are. They are more than capable of challenging the Bruins for the division, and if you keep overlooking them, you’re going to regret it. That being said, however, one of the reasons the Bruins lost in the playoffs to the Habs last year was because they had to rely on the likes of Kevan Miller, Matt Fraser and others. Those are players who likely wouldn’t have been playing in that series had Dennis Seidenberg, Chris Kelly and Adam McQuaid were healthy. But what happened, happened.

The Lightning are also going to be a threat and can challenge the Bruins. They’re solid from top to bottom and they’ll get Steven Stamkos back from injury, will have Ryan Callahan for a full season and have added solid skaters such as Brian Boyle and Brenden Morrow.

My only concern for the Lightning is if Ben Bishop can repeat what he did last year, his first full season in the league. How often have we seen goalies have one really good year and then fall off the face of the Earth (Andrew Raycroft, anyone?)? If Bishop can continue his strong play, the Lightning will be a big time threat to the Bruins.

If this team was exactly the same as last year, I wouldn’t be nearly as worried. But they’ve lost some big time goal scoring and leadership, and they still have some roster questions.

Who from Providence will stick on for the full year? Will it be Matt Fraser? Ryan Spooner? Can they be counted on for a full year? Will the defense take a step back because it lost Johnny Boychuk, or will Dougie Hamilton have enough of a breakout to overcome the loss? Will Simon Gagne end up having a role and if he does, how long can he keep it up?

The biggest question, of course, is can they maintain good health throughout the season, but that’s a question for every team.

Again, at the end of the day, I think the Bruins can, and likely will win the Atlantic Division. I also think it is very possible they make it to the Stanley Cup Final and win it. But don’t pencil them in to do any of that just yet, because the Canadiens and the Lightning are breathing down their neck.