Bruins to face off against revitalized Blue Jackets 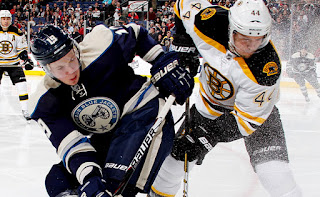 The Boston Bruins have gone from Minnesota, to Detroit, and are now in Columbus where they will face the Blue Jackets tonight. The Bruins are coming off of a 6-5 loss (Fun Fact: The Bruins have allowed 19 goals in 4 games) against the Red Wings while Columbus have won 6 of their last 8.

Tonight's game will be goal tending versus goal scoring. One goal scorer and one goal tender in particular, Brad Marchand and Joonas Korpisalo, respectively. Marchand has scored a goal in 12 of the last 13 games and has 7 straight goals. Meanwhile, in the Columbus net, rookie goalie Joonas Korpisalo is 8-1-2 with a 1.94 GAA. It will be interesting to see who can out perform the other.

(Bergeron is a game time decision for tonight's game)