Bruins vs Jets: start of a 6 game roadtrip 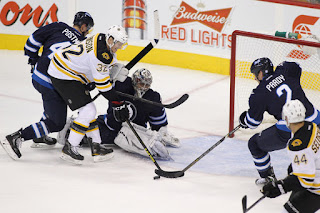 The Boston Bruins start their longest road trip stint of the season tonight against the Winnipeg Jets. The Bruins are coming off of a 9-2 loss Tuesday night at home against the LA Kings. This is a really important game for the Bruins, if they come out flat and lose the game its a really bad sign as local sports analysts are already calling for the front office to blow up the team.

But if the Bruins want to come out strong to prove last nights game was a fluke, they obviously need to tighten their defensive game. It's hard to ask someone like Miller to go from a top 6 defenseman to a top two defenseman but that's the situation the Bruins are in. Miller and the rest of the defense don't even have to be good. They have to be okay, they can't let in 9 goals.