Tuukka Rask has a lot to prove this year 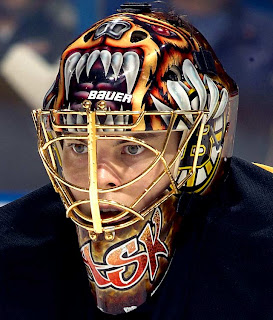 It's officially Tuukka time. Tim Thomas' decision to sit out the 2012-2013 season has removed any controversy in the Bruins net minding department.

Rask, 25 is done being a back-up and is ready to be an everyday starter in the NHL. Tuukka has waited patiently for the last two years while Thomas dominated time in the crease.

Tuukka-mania began in the 2009-2010 season when the young goal tender took the city by storm posting a 22-12-5 record with a 1.97 goals against average. He continued his stellar play into the second round of the playoffs where the Bruins held a 3-0 lead on the Flyers. His youth and inexperience then took over and he was unable to carry the team to another victory loosing the series in 7 games.

Tuukka spent the next 2 years as a spotter for Tim Thomas averaging 24.5 starts per season. Over that span he posted a 22-22-5 record with a GAA of 2.36. Tuukka will have to improve these numbers for the Bruins to have any shot at the title.

Being an outright starter for the team will do well for Tuukaa's confidence. He knows he's the guy and it's his job to lose. It's really just a matter of staying healthy and keeping the puck out of the net. Tuukka had this to say about the upcoming season and his increased workload.

"I haven't seen the schedule, but I'm assuming it's going to be every other day," Rask said. "The workload's going to be big, but that's why you work out during the summer, and for me, I went to play overseas to stay sharp and in game shape. It shouldn't be an issue."

The Bruins need Rask to step up to the elite level of goal tending that wins Championships. Let's face it if Timmy Thomas doesn't stand on his head for the entire 2011 playoff run then the Bruins wouldn't have won the cup and Julien would no longer be on the bench for the B's. There is no doubt in my mind that a hot goalie can win you the cup and a cold one can lose it for you.

So the pressure is on for Rask. It's on his shoulders and he will be held accountable if the Bruins don't win the cup this year or at least get there. Also I'm sure he is aware of the draft pick they used on Malcolm Subban and if Rask can't get it done this year changes will be made.