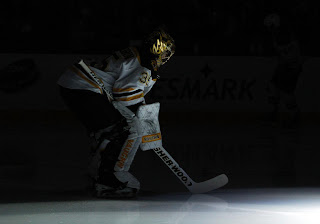 I guess it wasn't Boston's night. The Celtics got mauled by the Bobcats, the Patriots made no splashes in the free agent pool, and the Bruins blew a late third period 2-0 lead to eventually lose 3-2.

The Bruins came out strong in the first period scoring a late Powerplay goal on a Zdeno Chara rip, and a nice goal by Tyler Seguin assisted by Brad Marchand and Patrice Bergeron.

Pittsburgh would apply pressure, but the Bruins were able to hold them off, until they broke the seal 13:42 into the third. Chris Kunitz scored first, and then Brandon Sutter scored two more times.

The Bruins looked gassed after the first period. They were unable to sustain offensive pressure, and it came back to bite them in the ass.

Khudobin looked good to start off the game making a number of great saves to keep the 2-0 lead, but he and the defense wouldn't hold up.

The Bruins recorded the least amount of shots on goal all season with 16 compared to 34 by Pittsburgh.

Sure you can blame it on the 3am arrival into Pittsburgh, but this was a game the Bruins should have won. Pittsburgh played better the last two periods, and took advantage of the Bruins fatigue and mistakes.

They get a much needed day of rest before going back to Boston Thursday to play the Florida Panthers.