Kelly Out, Khudobin Get's the Start 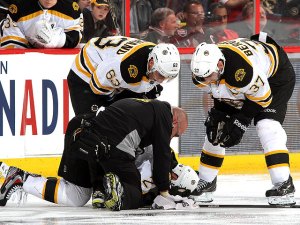 News prior to puck drop: Chris Kelly, who sustained an undisclosed injury last night in Ottawa will not be playing tonight. The third line should look like this: Jordan Caron on the right , Rich Peverely at center and Jay Pandolfo on the left.

More on Kelly from Coach: "We'll probably be able to give an update in the next day or so once he gets home and the swelling goes down^CS
— Boston Bruins (@NHLBruins) March 12, 2013

Also, Tuukka Rask will get the night off on the back to back. Before we start to worry here are Khudobin's stats:

Compared to Penguins starter, Marc-Andre Fleury stats of 2.71 GAA and a .902 save percentage.

Should be a good game, puck drops in 30 mins on either NESN or NBCSN.