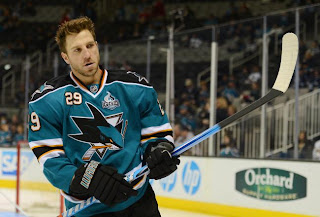 There are numerous rumors that the Bruins are interested in trading for San Jose forward Ryane Clowe. Clowe, 30 years old, is having a terrible year, with no goals and 9 assists in 25 games. He is not really a  point machine or a goal machine for that matter as his career highs are 24 goals and 38 assists for 62 points in the 2010-2011 season.

98.5 the Sports Hub talked about Clowe this morning stating that even though he is having a bad year, maybe a change in scenery could help him emerge. 98.5 the Sports Hub also noted that Swede, Carl Soderberg's playoffs are over, so he could potentially join the Bruins now.

Now what is the asking price for Clowe?

According to ESPN Boston's, James Murphy, it's a 1st round pick and prospect that the Sharks want in return.

I know the Bruins have strong interest in Ryane Clowe but asking price is 1st rd pk and prospect from what I am told. Too high.
— Jimmy Murphy (@MurphysLaw74) March 12, 2013

If that is true, then I say don't do it. Go find someone else that can offer a little more than Clowe. Someone like a  Brenden Morrow of Dallas, or Jerome Iginla.

Fellow Bruinslife writer Eric Goldmann wrote earlier that the Bruins should trade for either Iginla or Morrow as long as they can keep Ryan Spooner and create a line of Pevs, Spooner and Iginla/Morrow.

A side note, with McQuaid out 3-4 weeks don't be surprised if Chiarelli brings in another defenseman to relieve some pressure. Right now we are down to four good defense men, Chara, Seids, Boychuck and Dougy Hamilton. Ference has been playing rather shitty this year, and Aaron Johnson is not going to cut it.

Trade deadline is a few weeks away and we will do our best to keep our fans updated on any news that emerges.