Keys To The Game Vs. Toronto Part II

The Bruins road stint is over and now they have a two game home stint starting with Toronto tonight. The two teams faced off Saturday in one of the Bruins most dissapointing games all season. The Leafs beat the Bruins 3-2 but the score didn't reflect how poorly the Bruins played. Luck was a big factor. 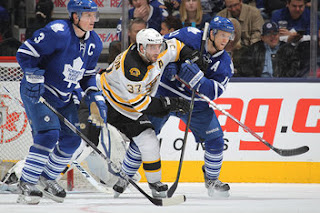 Claude Julien knows his team can do better and all signs point to line changes tonight. The lines will most likely be Paille-Bergeron-Seguin, Marchand-Krejci-Horton, Lucic-Peverly-Caron, and Pandolfo-Campbell-Thornton. The Bruins need Lucic and Horton to score goals. Which is why Cluade moved Lucic down the third line.

Paille is someone who has been scoring. Paille has 6 goals and 5 assists. 6 goals is more than any single player on the third line and more than Lucic who has 4. Paille is more of a wake up call for the third line and for Lucic. The fourth line grinder has more goals than Lucic and Peverley. If that doesn't get their grinds gearing, then only a trade would, and now Morrow is off the market. 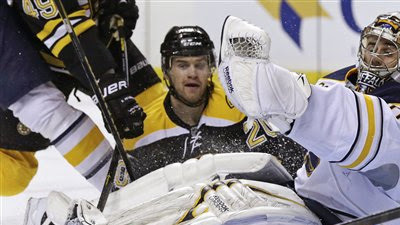 1) Prove Your Ground. Lucic has been demoted to the third line. If he doesn't start scoring then 4 million dollar cap hit looks mighty lofty. Then in the 2013-14 season it turns into a 6 million a year contract. For a team on the edge of the cap line, 6 million dollars for a few goals isn't worth it. If Lucic want's to stay in Boston, and ofcourse who really wants him out of Boston, he needs to start scoring more consistantly or at least start playing as physical as Thornton and Paille.

2) Kadri The Killah. Nazem Kadri is the next big thing for the Toronto Maple Leafs. It was easy to see in the first game of the two game series. Kadri scored one goal against the Bruins and so far this season has 14 goals and 20 assists. Kadri is more important to the Leafs than Kessel and seems to be a better player than Kessel. Kadri was a good pick by Burke. If only he brought him up earlier, maybe he would still have his job.