Keys To The Game Vs. Pitt

Pittsburgh is a city that equals Boston in tougness, grit, and strength. It reflects in the rink. For the first time this season the Bruins go up against Pittsburgh.

Pittsburgh is a top heavy team with elite NHL star power. Sidney Crosby and Evgeni Malkin are the centerpoint of the team and among the players that represent the league. Ask a band wagon fan or a "casual" fan who the best player in the NHL is and they'll riffle off Crosby almost immediately. Both Crosby and Malkin have faced injury though. Crosby has dealt with concussions and Malkin is out 1-2 weeks with an upper body injury.

1) Bad Blood Thining. Matt Cooke landed a dirty hit on Bruins player Marc Savard a few years ago. Cooke hit Savard in the head and Savard went down with a concussion. He missed that entire season and when he came back he was hit by Matt Hunwick and went head first into the dasher. He has not come back. But with Savard two years removed and Cooke "trying" to skate the strait and narrow, the bad blood between teams and cities is starting to reside. The Bruins can't let this happen. The Bruins are a tough physical team and need to make sure the elite scorers arn't the focus of Pittsburgh's coach Dan Bylsma. Perhaps make Byslma afraid to even put the guys out there for too long.

2) No Power Play. With that said the Bruins need to stay out of the box as much as possible. The Penguins powerplay with Crosby at the center is a scary thing. And with Chris Kelly undisclosed injury it looks like he will most likely miss this game. With the key penalty killer out the Bergeron and Marchand PK line will be looked to the most. 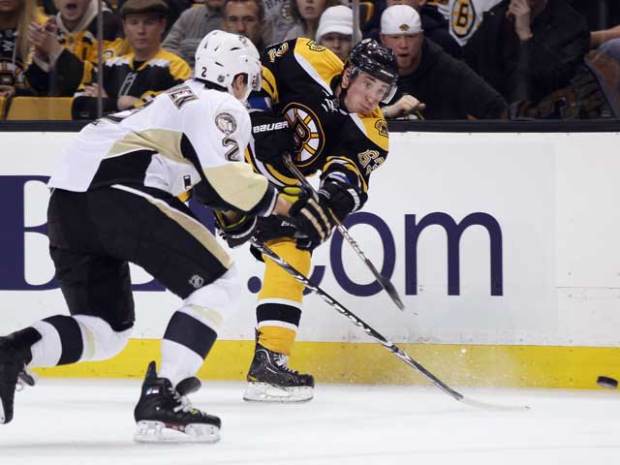