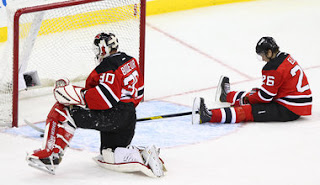 It looked like it was going to be a blowout as the Bruins came out strong scoring a minute into the game on a Gregory Campbell back hand from Jagr and Marchand.

Moments later, Daniel Paille and Rich Peverley converted a short handed two on one when Paille capitalized on his initial shot.

Gregory Campbell then scored again on another short hander, as he tipped Andrew Ference's shot in.

The Bruins continued extending the lead early in the 2nd as Zdeno Chara scored a powerplay goal.

The Devils dented into the lead when Patrik Ellias took away a puck from Andrew Ference.

Devil, Anton Volchenkov received a 5 minute major and a game misconduct on a blatant elbow to the head of Brad Marchand. The Bruins instead of converting on the man up they gave up a short handed goal as Lucic lost the puck and Travis Zajac put it past Anton Khudobin.

The Devils again cut the lead to one as Andy Greene blasted one home, but the Bruins quickly answered as Seguin scored.

The Devils made it interesting late as Matt D'Agostini scored on the man up due to the pulling of Marty Brodeur, but they couldn't tie it up as the Bruins escaped with the 2 points and a one point lead in the North East Division.

The Devils outshot the Bruins 28-18 and had 8 power play chances compared to 3 for the Bruins. Of course the Bruins continue their stellar performance on the penalty kill as they killed all 8. On the other hand the powerplay continues to struggle although they did convert on one early in the 2nd.

Jaromir Jagr had 2 assists, applying a nice offensive punch for the B's.

The Bruins come back to Boston as the Islanders come to town. Hopefully the Bruins aren't too worn out and hopefully nothing is serious with Brad Marchand.