Keys To The Game Vs Islanders (Still Pushing For The Playoffs)

After tongiht against the Islanders the Bruins will have only 8 games left in the regular season. It feels like just yesterday we, the fans, were fumming over the lockout and the owners greed. Now we are looking forward to another Bruins playoff push. Hopefully deeper than last year. But lets not get ahead of ourselves.

The Bruins are batteling for the Northeast Dvision, currently in first by a point, and the Islanders are just trying to make the playoffs as the 8th seed. As of now they are tied at 44 points with the Rangers and Senators. If the season started now they would all be in the playoffs in the 5th, 6th, and 7th seeds.

The Bruins have to play a team fighting for survival and a team better than the Devils. As the Islanders battle for the playoffs and the Bruins battle for the Northeast dvision, both teams are trying to work out their kinks and flaws.

For the Bruins it's their defense which is unusual for the team. The offense is finally starting to click once again for the Bruins and now the defense is starting to falter. Just what they needed.

The Bruins are also without their leading goal scorer Brad Marchand. Luckily the Bruins do have Jagr and can still score. No thanks to Lucic. 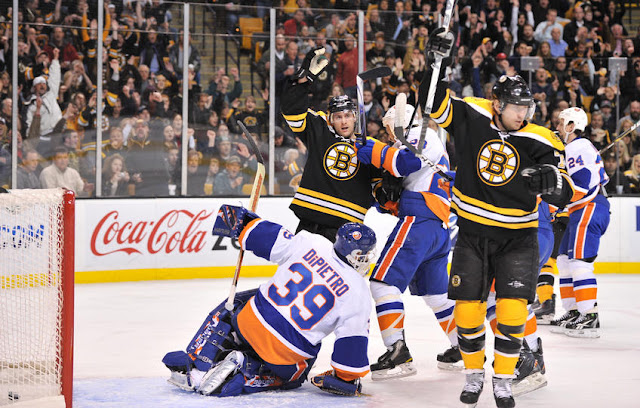