Keys To The Game Vs Devils

It's not often you see a team skate a mediocre game and win by a four goal margin. The Bruins beat the Carolina Hurricans 6-2 in a game thats easy to write off, Carolina is awful without Ward. Now the Bruins face a team that are an actual threat to them. A team similiar to themselves. The Devils. 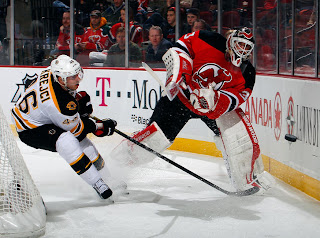 The last time the two teams faced off only one goal was scored and it was by newly aquired Bruin Jaromir Jagr. The Bruins buckled down and played defense while Khudobin played stellar in net for the Bruins. The Devils and the Bruins are the two most defensive and tough teams in the Eastern Conference. The Devils like muckers and grinders and the Bruins like big powerful skaters and Claude likes to screw up lines.

It results in a defensive battle that sends pink hats and bandwagoners running in a period. Thank goodness.

The Devils are 15-14-10 on the season and are battling for the 8th seed in the East only 2 points away. This makes the Devils desperate and the last thing the Bruins want to see is a good desperate team. The Devils have a balanced aray of scoring this year, shown through David Clarkson being their leading goal scorer over Kovalchuck.

The Devils are doing even worse in the scoring dapartment than the Bruins. And thats saying a lot. The Bruins need to take advantage of a weaker team.