Bruins vs. Capitals: Keys To The Game

Tonight the Bruins play the second to last game of the season as they go head to head against the Washington Capitals. Though the game is late in the season it's still a very important game. The teams in the East already know who's in the playoffs and who's out. The Bruins are in but are fighting Montreal for the division and for the second seed in the East. Both teams have 61 points and the Bruins hold the tiebreaker because they have played less games. 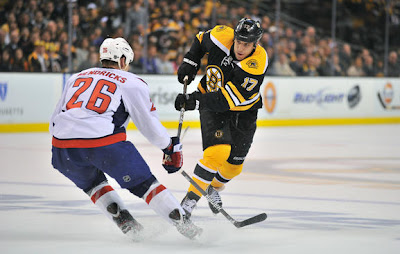 The Capitals on the other hand know their fate. The Caps clinched their division and are finishing as the third seed no matter what. The team struggled at the beginning of the season but both the team and Alexander Ovechkin had what you could call a "rebirth". Ovechkin now leads the NHL in goals with 32 and has 22 assists to go along with it.

The Bruins can't find scoring that easily. The Bruins of course look to defense and goal tending. The defense recently hasn't been up to par though. Without defense the Bruins can't even win a regular season game. Any casual fan can tell most Bruins loses this season come from defensive struggles. Zdeno Chara is the focus point of the Bruins defense and Chara hasn't been himself recently. What the big defense-man really needs is some rest before the playoffs.

A few Bruins will miss the game against the Caps and not just for rest. Forwards Nathan Horton and Jaromir Jagr are both going to miss the game. Horton is out due to an injury sustained in the "fight" against Jarome Iginla. Jaromir Jagr is out with the flu, which has been a big problem all around the NHL this season.

Tuukka Rask
(Subject to change. Redden could play. Krejci might be out. Hard to tell at end of season.) 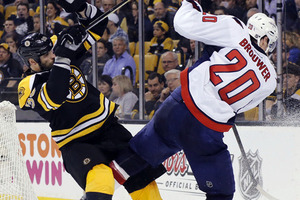