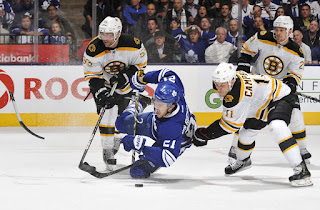 David Krejci showed up for the playoffs as he scored a hat trick leading the Bruins to a 4-3 overtime win to increase their series lead to 3-1.

Despite the Bruins outshooting the Leafs in the first period they found themselves down 2-0  as Toronto came out to an early 2-0 lead behind goals by Lupul and Franson.

The Bruins picked up a huge power play at the conclusion of the 1st and capitalized seconds into the 2nd stanza when Patrice Bergeron scored. The Bruins then tied the score a 2 a piece on a scrappy goal by David Krejci. Minutes later, on the powerplay, Horton found Krejci for an absolute snipe to bring the Bruins to a 3-2 lead. Toronto answered quickly 46 seconds later when McArthur scored a goal from the slot.

The Bruins and Maple Leafs went back and forth throughout the third as the Bruins killed off a crucial Maple Leafs powerplay early in the third and picked up a 4 minute double minor power play, but couldn't convert.

The game went to overtime, where each team had their chances and Tuukka Rask came up huge. With under 6 minutes to go in the first overtime, David Krejci put the puck past Reimer sending the Bruins home with a 3-1 series lead.

Both the Bruins and Maple Leafs got beat up in this one. Lucic, Boychuck, Kelly and Horton all got banged up, Horton got banged up on the final play but managed to skate off the ice.

For the Leafs, Fraser got a slapper from Lucic off the forehead.

The Power play finally came through going 2/5 as well as the penalty kill going a perfect 4/4.

Tuukka made 45 saves on 48 shots, with 11 coming in overtime. He was the reason the Bruins had a chance to win it in overtime.

Just some house keeping, Krejci has 10 points in the first 4 games.

The Garden will be rocking Friday night as the Bruins look to end the series and get some much needed rest before the second round starts. Rage the beard!