TORONTO -- Last night was the reason hockey fans are hockey fans. It couldn't have been a more wonderful night for a Boston Bruins fan. The New York Islanders beat the Pittsburgh Penguins 6-4 which tied the series at 2-2. The Ottawa Senators scored a game-tying goal with less than 30 seconds left in the third and then beat the Montreal Canadians in over time to take a 3-1 lead. To cap off the night the San Jose Sharks beat the Canucks sweeping them in 4. 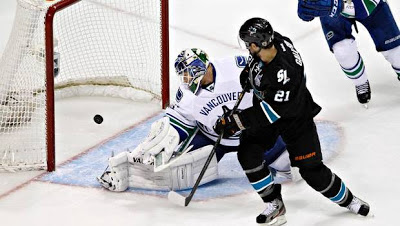 Gives you warm fuzzy feelings doesn't it? And tonight the Bruins play with a chance to extend their series lead 3-1. As fans look around the league, it looks like the door is beginning to creek open for the Bruins. Pittsburgh is struggling and it looks like Montreal will be bounced. It's great to have NHL playoffs again.

The Bruins played a good game 3, not great, but the team played well in front of Tuukka Rask and put the puck in the literally top shelf by Reimer. For the first time perhaps all season the Bergeron line didn't play as well as they usually do. And Marchand and Seguin haven't been scoring. The Bruins need Marchand to step up and start putting the puck in the net or else the Bruins don't really have a shot at the cup. Yes just two years after starting the season on the fourth line, Brad Marchand has become one of the most important Bruins players.

The Maple Leafs are going to play hard against the Bruins tonight. They know that if they lose tonight then the Bruins can close out the series at home in game 5. The Leafs also don't want to lose both their games at home in front of their fans who haven't been in the playoffs since before the 2004 lockout.