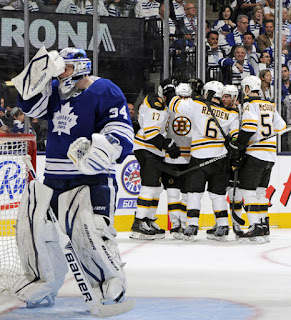 The Bruins shut up Toronto and their fans with the "cool" scarves to the tune of a 5-2 game three victory.

The Bruins cracked the scoreboard late in the third as David Krejci won the Toronto zone face-off and Adam McQuaid blasted a puck from inside the blue line.

The Bruins added to the lead early in the second period as Jaromir Jagr found Rich Peverley.

Toronto cut the lead in half on a Jake Gardiner power play goal, but the Bruins quickly answered as Nathan Horton scored off a feed from Milan Lucic and then Daniel Paille scored short-handed.

Toronto showed some signs of an epic comeback as Phil Kessel cleaned up the sloppy rebound early in the third period, but the Bruins held Toronto off and David Krejci tapped home the empty netter to give him 3 points on the night.

Tuukka Rask came up huge on a number of occasions saving a total of 45 saves.

The powerplay and penalty kill showed some weakness as the Bruins finished the night 0-3 on the man up and 2-5 a man down.

Regardless this game was a turn in the right direction after Saturday's stinker. The Bruins need to keep the physical aspect and continue to fire on all cylinders to have a chance to end the series Friday.

The Bruins get a day rest before game 4 back in Toronto on Wednesday night. Hopefully the Bruins can keep the Toronto crowd quiet again.