Down go the Canucks 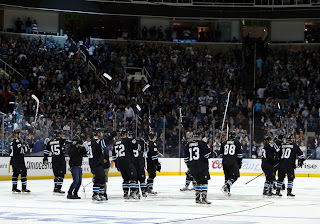 Since the NHL playoffs are always a special time of the year I am going to try and keep our followers updated with out of town hockey news as well as the Bruins.

If you haven't been watching the other playoff series, you are missing some great hockey.

In the East, The Montreal Canadiens fall 3-1 in their series with Ottawa after blowing a 2-0 lead late in third to eventually lose in overtime in one of the softest goals.

Pittsburgh also lost last night as the New York Islanders scored 3 third period goals to come away with a 6-4 victory and even the series at 2 games a piece.

In West, The San Jose Sharks swept the Vancouver Canucks 4-3 on a Patrick Marleau overtime goal. This is the second straight year the Canucks have lost in the first round, after making it to game 7 of the Finals against the Bruins in 2011. Vancouver is 2-12 in postseason play after Aaron Rome head-hunted Nathan Horton.

Finally, Chicago came one win closer to moving on as they went up 3-1 i their series vs Minnesota after a 3-0 win.

There are a number of games on tonight, starting with the Bruins trying to go up 3-1 on the Maple Leafs at 7, New York Rangers will try to even the series at 2 games a piece against the Capitals at 7:30.  The Kings and Blues battle it out in a 2-2 series at 9, and the Ducks and Red Wings will battle it out at 10.

Keep your eyes open for the Bruins keys to game 4 and the Bruins postgame recap.