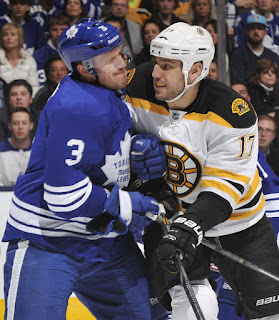 The Bruins made James Reimer look like the Vezina winner. (sounds familiar to last year with Braden Holtby)

The Bruins and Maple Leafs went into the third period scoreless, before a Krejci turnover lead to a Maple Leafs rush and a shot by Nazem Kadri tipped by captain Dion Phaneuf and past Tuukka Rask. Minutes later, Bruins "favorite" Phil Kessel knocked home his third of the series and an absolute dagger into the hearts of Bruins fans after a scrum in front of Tuukka couldn't get the puck out.

Lucic cut the lead in half with 25.5 seconds left in the game, but it was too late and Boston couldn't pull off the miraculous comeback.

Tuukka Rask played on top of his head tonight, he made a number of critical saves in the first two periods and especially as time was winding down in the second. He is not the reason the Bruins lost tonight.

I don't understand Claude Julien and the love for the second line, they haven't done shit all series, mix it up, put Karl Soderberg in or move Jagr off of the third line. The first and fourth line are the only lines that consistently go out there and show heart.

I don't know what is going to happen tomorrow in game 7, but I am pissed and I'm sure Bruins Nation is pissed too. This team is so skilled yet make everything so God damn difficult. A series where the Bruins had the chance to step on the throats and end it Friday, now goes to a game seven with no rest in between. I hope they do something tomorrow night or it will be a long off season.

Game 7 is at 7 pm tomorrow night, let's hope they come out guns a blazing, I want a reason to keep this beard raging.

Sound off in the comment section, tell me how stupid I am, I don't care I'm pissed right now and I'm sure you are too if you're a big Bruins fan.