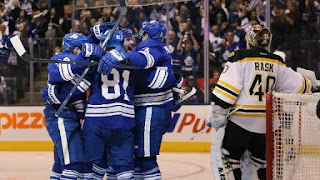 The Boston Bruins couldn't close out their series (stop me if you've heard that before).

The Boston Bruins also have to play another Game 7 after being ahead in their series (stop me again?)

At 7:00 pm, the Bruins will play another Game 7, and fans will endure yet another day of gut-wrenching thoughts ricocheting around in their brains' of 'they-should-not-be-playing-this-game-tonight.' Does it seem like this happens every year when the calender turns to April? Oh, that's because it does. In the past two years, players on this Bruins team has gone out of their way to deflect every question that comes their way when 'playoffs' and 'collapse' are mentioned in the same sentence. Hell, throw in 'choke,' 'lead' and 'why the hell can you not close out an opponent in a Game not numbered 7' in there too, for good measure.

Since 2008, the Bruins are 6-12 in 18 elimination games. Just in the last three years: 3 games versus the Flyers in 2010. Game 6 versus Montreal in 2011. Game 6 versus Tampa Bay (you can also throw in Game 4 of that series, where they let a 3-0 lead in the 2nd period slip away). Last year they had a 2-1 series lead versus the Capitals, and yet again they let the opponent hang around instead of finishing the job, and they payed for it with an overtime loss in Game 7.

Looking at this year in the NHL playoffs, we have already seen the Penguins, Blackhawks, Kings, Sharks and Senators win their opening rounds in their first elimination game. The Hawks, Kings and Sharks did so at home. The Senators and Penguins did so on the road. The Bruins have had one shot at both, one home and one away, and they have come up short both times. So believe me, as much as it seems improbable, it IS possible to close out a series before it can go the distance.

But this is the status quo with this Bruins team and coach. They seemingly can do nothing the easy way. Instead of putting forth a complete 60-minute effort on Friday night on home ice, the team instead coasted for nearly half of the game, decided to 'flip the switch' late in the second period, but by then it was too late. Another missed opportunity. Another blown chance to finish the Maple Leafs and send them home.

The top line of Krejci, Lucic and Horton, save for a Krejci assist Friday night and a garbage-time goal for Lucic in Game 6, have again disappeared. Speaking of vanishing acts, the Bergeron, Marchand and Seguin line has been brutal all series. Both Tyler Seguin and Brad Marchand look completely lost and out of position every time they step on the ice. Patrice Bergeron has had his handful of scoring chances, but it is still nothing to write home about. They are constantly fighting the puck and cannot seem to get it settled. Seguin has lost puck battles and flat out missed the handful of wide-open shots he's had. Has Marchand recorded a single shot on net? Is there visual evidence supporting that question?

Now it is again do-or-die for the B's. And again, it comes with a Game 7 on home ice. Last year many were willing to give the team a break for their early exit versus the Capitals as a result from the 'hangover' from the Cup year. This year, there are no excuses. Tonight there are no reasons why this team should not win this game.

Now James 'the Sherminator' Reimer and the Maple Leafs are confident. Phillip Kessel can single-handedly obliterate the hearts and blood pressures of millions of Bruins fans across New England. The young and unproven group can send the city of Toronto into a place they haven't been in nearly a decade: the second round of the playoffs.

And yet again, the Bruins will go into the off-season answering questions on how they blew another substantial series lead in the playoffs.

Stop me if you've heard that before.