Toronto -- The Bruins vs Maple Leafs series has been extended to game 6 after the Bruins played a very disappointing game 5.

The Bruins lost to the Maple Leafs 2-1 on Friday night in one of the most disappointing showings all season. It seemed as if no one showed up for the game mentally except Tuukka Rask. The Bruins were only kept in the game because of Rask and luck. Toronto had many great scoring chances but they were stopped either by Tuukka or just bad luck on their part. 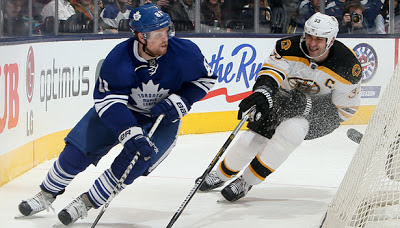 The Bruins go into game 6 with the fury of the fan base behind them and Claude Julien once again sitting on the hot seat. Now the Bruins aren't just dealing with their own motivation issues. The Leafs are playing in front of their home crowd, where they lost twice, and now have a chance to extend the series to game 7. The Leafs will be riding a tidal wave of momentum, emotions, and motivation that can easily over power the Bruins.

Claude Julien could decide to actually be a NHL coach and make some tough decisions. Decisions that for any Bruins fan, isn't that tough. Like putting a Seguin-Krejci-Jagr line together. Or Marchand instead of Seguin. The Bergeron line hasn't been performing as well as they have all season and maybe Claude should bench one of them for Soderberg and give him a try. The fans just want to see Claude do something and so does the media, the non bias media that is.