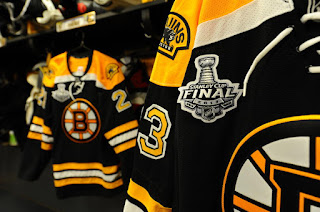 It's a different style than what other NHL teams play. It's different than what other teams try to play.
29 other teams try to match the perfect blend of physicality, toughness, heart, determination and skill that the Bruins roll with.
And 29 other teams fail.
The Vancouver Canucks were stifled in the 2011 Stanley Cup Final, their star players shutdown and choked out over the course of seven games. Scoring a measly eight goals total, the Bruins slowly picked apart the Canucks shift by shift, period by period.
The Pittsburgh Penguins in this years Eastern Conference Final were smashed to pieces in four straight games. Each game dominated and dictated by the Bruins pace and style of play.
The Chicago Blackhawks are the next team in line experiencing the suffocating, bone-crushing and meanacing style that this group of Bruins players has perfected.
The Bruins have Chicago in a bear-sized headlock. They tightened the vice-grip in Game 3 and squeezed the life out of the 'Hawks over 60 minutes.
This team is a parasite. They are a black-and-gold tapeworm. They infect their victims early with the likes of Milan Lucic and Zdeno Chara lining up their opponents and demolishing them with bone-shattering collisions.They slowly, but surely, chip away at the psyche of other teams. The aftermath of those hits take up residence in the back of opponents' minds, settling in their consciences. 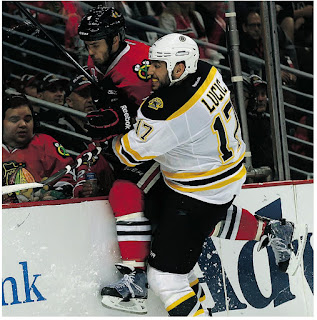 If you haven't seen the Lucic GIF yet, do so. If you have, do yourself a favor and watch it again. Niklas Hjalmarsson completely bailed on the play. He heard Lucic coming before he saw him. He ducked back and scurried out of the way just to escape another jarring hit.
This is the Stanley Cup Final. The last hurdle for players to reach the glory land. To achieve the status as a champion in their career. And the hockey senses of Niklas Hjalmarsson, in that one split-second decision to bail on the play, flew from his brain.
Instead, the most basic of human instincts replaced it:
The instinct to stay alive. The instinct to survive.
The Bruins have successfully injected their venom into the Blackhawks, and their bodies are rejecting the poison. But it is too late. The Bruins are strangling another high-flying and high-profile team to death right before our eyes.
They may not be the most skilled team in the NHL (see Canucks, Penguins, Hawks), but they are the most dominate. They are the most physical. They are the toughest.
And that is what wins in the NHL playoffs. 5-4 games during the regular become 2-1 nail bitters in the playoffs. That's just the way it is. It's the nature of the beast in the NHL.
Blackhawks coach Joel Quenneville tried to break up the Bruins' groove. He tried to turn the tide of Game 3. He shuffled his lines up and down the lineup. Nothing worked. Again, the 'Hawks' star players were shutout on the score sheet and the scoreboard.
Down 2-0 in the 3rd period, the 'Hawks still could not generate decent enough scoring chances. Bruins goalie Tuukka Rask again shut the door, posting his 3rd shutout of the playoffs.
The Bruins now lead the series 2-1, and the B's are two games away from winning their second Cup in three years.

The 'Hawks finally pushed back very late in the 3rd period when dual-agitators Andrew Shaw and Brad Marchand engaged in a wrestling bout while Bryan Bickell decided to take on Zdeno Chara.

It was the first outburst of emotional anger the 'Hawks have shown in the series. The virus planted inside the 'Hawks finally burst. It drove the 'Hawks over the edge and showcased their mounting frustrations.

You have to wonder if it is too little too late for Chicago. Game 4 is Wednesday night.
Follow @m_burke42