Paille Snaps Home the OT Winner, B's Tie the Series vs the Blackhawks 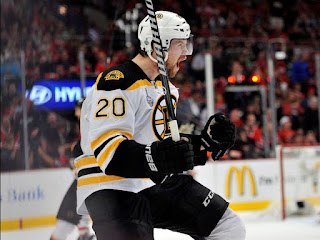 Anytime the Bruins want to stop playing overtime games in these playoffs is fine with me.

Following the triple OT marathon, last night it was the Bruins who came out victorious in the extra period, avenging the deflating loss suffered in Game 1.

Bruins winger Danny Paille snapped home his first career OT goal,  a wicked wrist-shot past Blackhawks goalie Cory Crawford at 13:48. He sealed the victory for the Bruins and sent the series back to Boston tied at one game a piece.

Game 2 started out as badly as you could possibly imagine for the Bruins. The opening 20 minutes was some of the worst hockey I've ever seen this team play. The Blackhawks, on the other hand, came out right from puck drop all systems go. The 'Hawks totaled 19 shots on Bruins goalie Tuukka Rask in the first period. Read that again. 19 shots! For some teams in the NHL that could pass as their total for a game.

The 'Hawks got on the board first after an intense sequence in front of Rask's crease, a moment where he made four to five point-blank saves, the puck leaked out to the left-circle, where Patrick Sharp tracked it down, spun around and let loose a seeing-eye wrister that somehow found its way past the mass of bodies in front of the net.


Through all the dominating play, the Blackhawks only scored that one goal. Their inability to capitalize on their electrifying opening 20 minutes cost them dearly in the end.

The B's weathered the storm and began to settle in at the start of the second period. Deep into the frame, at 14:58, the B's got their break-through. The newly-formed 3rd line of Chris Kelly, Dan Paille and Tyler Seguin produced the goal after a monster shift in the Hawks' end.

Much maligned in these playoffs, Kelly was the one to swoop in from the blue-line and smash home a loose puck in front of the net following a  terrific shift from the (soon to be) OT hero Dany Paille and Tyler Seguin.

After a pinch at the blue-line from veteran d-man Andrew Ference, Seguin and Paille kept the heat on the Hawks' Sharp and defensemen Nick Leddy. Both fought through multiple checks along the boards and weaved their way through the traffic behind the net.


Paille's stick move around Leddy got it to the front of the net, where it trickled through Patrick Kane's skates and was waiting for Kelly to smash it home.

The Bruins carried most of the play through the third period, and in overtime, it was their turn to flip on the turbo. The B's recorded 8 SOG, one of them being the game-winner off the stick of Paille, and the result of another hard-skating shift from the new 3rd line.

Again, it was Andrew Ference who got it all started. Following a faceoff win from Kelly, the puck came to Ference who rifled in on net. The puck came to 'Hawks d-man Brent Seabrook who attempted to wire the puck along the boards and out. Blackhawk Brandon Bollig misplayed the puck, which allowed Adam McQuaid to keep it in the attacking zone. He flipped it onto Seguin, who looked up and saw Paille alone in the middle of the ice and got it to him.

Paille's dagger sends the series back to Boston tied at one. They now hold the advantage of playing 3 of the next 5 games at the TD Garden, if need be. Game 3 will be Monday night and Game 4 Wednesday night. The Bruins have not lost at home since May 10 versus the Maple Leafs, which is crazy to think about. The building will be electric. Lets see if the Bruins can ride the wave to another win in front of their home crowd.
***
Tyler Seguin had probably his best game of the year. He was active in all three zones, backchecking and hitting players in the corners. The new line generated plenty the two goals, along with plenty of scoring chances. Just using the eyeball test, the group  looked way more dynamic than what the B's had in Game 1. And he was mic'd up for the game winner, which was pretty awesome to watch.

*Tuukka Rask AGAIN saved the Bruins' bacon. His performance in the first period alone was worthy of first-star honors. He kept the Hawks off the board for the rest of the game after Sharp's goal. He was outstanding from start to finish.


* Jaromir Jagr WILL SCORE A GOAL IN THE FINAL! It has been PAINFUL to watch Jagr hit about a dozen posts during this playoff run. He again rang the crossbar in overtime with a wicked wrist-shot that went right over Crawford's shoulder. Yes, his speed is an issue in open ice, but his puck control along the boards is second-to-none in this series. His imposing presence is needed.

As it has been proven over the years, the Bruins can come out of the gate flat, yet still weather the storm and eventually play into their groove and prevail in the end.

The win in Game 2, depending on how the series ends up for the B's, will go down in lore as one of the greatest road playoff victories in franchise history. Lets see what the Bruins can do in Game 3.