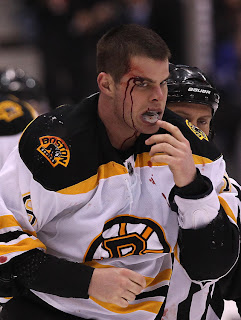 You could hear the collective gasp through the numerous television screens when Bruins forward Nathan Horton skated off the ice, during game one, with an apparent upper body injury. What made matters worse was the lack of information surrounding Horton's status moving forward. Is he going to play? Is he done for the rest of the series? Bruins fans had no idea what to expect from the 28-year old, and panic began to set in.

With 18 points (7 goals and 11 assists) and a plus-minus of 22, good enough for second behind David Krejci, Horton's absence would be noticed immediately. Fortunately for the Bruins, and their fans, Horton will be on the ice tonight for game two. How much of an impact will Horton have is yet to be seen, but tonight should tell us all we need to know about his ability to play moving forward.