Finally...the NHL has released the schedule for the upcoming season. Also, they've revealed the names for the newly re-designed divisions, 'Atlantic,' 'Metropolitan,' 'Pacific,' and 'Central.'

They're a far-cry from the hopes of Adams, Smythe, Norris, Selke, etc, along with dozens of other suggestions that fans have lobbied for since the NHL announced last year the plans to redo the divisions. Alas, the NHL stuck with the geography-based names, even though some of the geography doesn't make sense. Oh well.

As far as the Bruins are concerned, the old core of Boston, Buffalo, Montreal, Ottawa and Toronto are unchanged, but its newcomers Tampa Bay, Florida and Detroit that give the division quite a shakeup. The Atlantic division will feel quite familiar, but the addition of the Red Wings makes it the most intriguing collection of teams in the NHL, as the Red Wings' history and star-power will fit perfectly in the deep-rooted rivalries of Boston and the four Canadian cities. And then you have Florida and Tampa. Thanks, Bettman.

Without further ado, here is a quick rundown of the most intriguing matchups in the '13-'14 season.

Saturday, Oct. 5 vs Detroit
The second game of the year is the first meeting between the new division partners.

Monday, Oct. 14 vs Detroit (1 p.m.)
The Wings return to the Garden a week later for a matinee matchup.

Thursday, October 24 vs San Jose
Joe "The Original #19 Bust" Thornton returns to Boston yet again. The questions will be asked of the parallels between the B's "giving up" on both Thornton and Tyler Seguin early on in their careers. The similarities between the two situations go way beyond the two players not living up to the hype. I'm sure Jumbo Joe will have something to say about what went down.

Wednesday, October 30 at Pittsburgh
The Penguins will get their shot to extract revenge after flaming out vs the B's in the Eastern Final. Oh, and Jarome Iginla will be soundly booed by the fans that once were doing back-flips when he chose them at the trade deadline.

Tuesday, November 5 vs Dallas
Tyler Seguin will make his anticipated return to Boston with the Stars early in November. The Bruins play Saturday versus the Islanders, and have two days off before playing Dallas. The lead up to this game will be extremely entertaining.

Saturday, November 9 vs Toronto
The Maple Leafs return to the TD Garden for the first time since their Game 7 collapse in May. Although its not all that bad for Leafs fans; at least B's fans cant use "Thank you, Kessel" against them anymore.

Monday, November 25 vs Pittsburgh
The B's welcome the Pens back to the Garden where they suffocated them in two games during the ECF. The Pens also return to Boston on Saturday, December 7.


Wednesday, November 27 at Detroit
The Bruins make their first division trip to Joe Louis Arena. I can not wait for these games versus the Wings. The history, the players, the fans, even the coaches; all of the elements of these two franchises combine to make an awesome spectacle on the ice. Shame on the NHL for not having more games in the past between Detroit and Boston.

Friday, November 29 vs New York
The annual NBC 'Black Friday' matinee that has featured the Bruins returns for a game versus the Rangers.

Thursday, December 5 at Montreal
First meeting of the year between the two rivals is in Montreal. 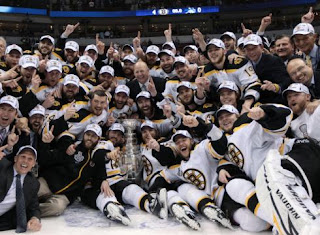 The Bruins return to the arena where they hoisted the Cup in 2011. The lockout prevented a meeting between the two teams this past year. With some key players missing from both teams since the series, lets see if attitudes will boil over in front of a Vancouver crowd that has not forgotten what happened two years ago.

Tuesday, December 10 at Calgary and Tuesday Dec. 17 vs Calgary
Longtime Flame Jarome Iginla will play his former team twice in a matter of seven days since swapping teams twice over the past few months. It will be the first time he plays his former club; funny how it happens in a week after never happening in over 17 years.

Thursday, January 16 at Dallas
The Bruins visit Dallas as Louis Eriksson returns to Dallas and Tyler Seguin welcomes his old teammates into his new home. Will he be producing like so many think he can and will for the Stars? Or will he be feeling the pressure with being the real center of attention for a franchise?

Sunday, January 19 at Chicago
The Bruins return to Chicago for a Stanley Cup rematch in a matinee versus the Blackhawks. The Final produced some epic games and unforgettable memories. The B's get their first crack at revenge starting at 3 p.m. Eastern.

Thursday, January 30 vs Montreal
The first meeting in Boston for the two teams happens at the end of January, rather late in the year. I like my Montreal/Boston games spread out over the year. Boo, NHL.

Tuesday, February 4 vs Vancouver
The Canucks return to the Garden for the second time since the 2011 Final. Roberto Luongo, who is now the main-man...again...after the Canucks shipped Corey Schneider to New Jersey.

Thursday, March 27 vs Chicago
The 'Hawks return to Boston after winning the Cup on the Garden ice.

So there are the most anticipated games for the upcoming year. It'll be fun seeing how this Bruins team with a few new pieces and coming off a grueling Cup run can function in a revamped NHL. The season starts for the B's in 75 days. It can't come fast enough.