Mired in their annual mid-season slump, the Boston Bruins came into Dallas on Thursday night looking to improve on - well - everything.

"It's gut-check time right now," Bruins' forward Reilly Smith said before the game, "and the points are huge."

Since winning their first two games of the new year, Boston had lost three of four coming into American Airlines Arena in Dallas, desperate for any kind of momentum to break their skid, staring down a brutal back-to-back set with a nationally televised matinee Sunday at Chicago and followed up on Monday night at home against the Los Angeles Kings... 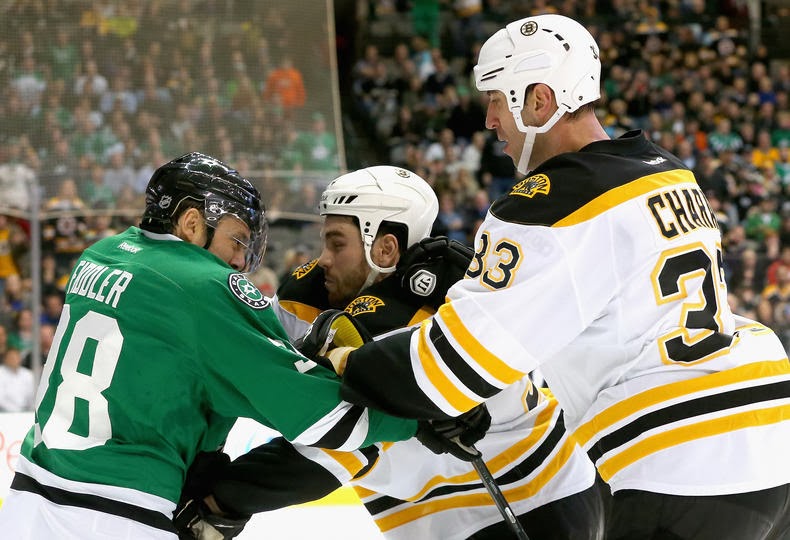 Time for a gut-check, indeed.

David Krejci snapped a six-game goal drought and Milan Lucic got a 10-game monkey off his back in helping the Bruins to a hopefully-funk-breaking 4-2 victory over the Stars.

Brad Marchand and Patrice Bergeron also found twine as Boston recorded their 30th victory of the season and, with Tampa Bay losing to the surging New York Islanders, claim back sole possession of first place in the Atlantic Division.

Eric Cole scored for the Stars, who have now dropped seven of their last eight and failed in their bid to win consecutive games in nearly a month, Jamie Benn also netting his 17th of the season and ex-Bruin Tyler Seguin assisting on both Dallas Goals.

At issue in Boston's over-hyped mini-slump, their normally burly defense had given up over four goals per game while scoring an average of just two despite generally outplaying their foes, running into hot goaltenders on their three-game roadie through California while their own netminder, Tuukka Rask, seemed out of sync, whiffing on saves that he normally would make.

But Rask wouldn't see the ice in Dallas, though starting netminder Chad Johnson came perilously close to a serious eye injury when teammate Zdeno Chara's stick found it's way inside his cage, leaving him sprawled on the ice, bloody and missing a contact lens.  Team trainers shored up the leak just under his left eye and Johnson finished up the second period sans the lens.

Johnson stopped 32 of 34 shots in his first start since mid-December.

Both teams also had a goal disallowed, Boston's Gregory Campbell deflecting the puck behind Dallas Goalie Kari Lehtonen with his shin pad just three and a half minutes in, but the replay official ruled that he had made a kicking motion and waved off the score - while Dallas had one waved off later in the game when the officials ruled that they had blown the whistle before a puck skidded past Johnson from a scrum in front of the net.

Krejci started the scoring for real with only four seconds remaining in the second period, taking a low pass from Lucic in the high slot and slapping a laser past Lehtonen, but Cole tied things up just over a minute into the final frame, Seguin throwing a puck into the slot that deflected off an unaware Cole for a garbage goal of an equalizer.

The Bruins responded exactly two minutes later, Marchand giving the Bruins the lead for good with a wrister from point blank, then Lucic redirecting a Krejci shot with the shaft of his stick for the eventual gamer with 4:14 remaining in regulation.

Benn made things interesting with a man advantage goal after Lehtonen had abandoned his post in favor of the extra skater, but Bergeron put the dagger in the Stars with an empty-netter less than a minute later.