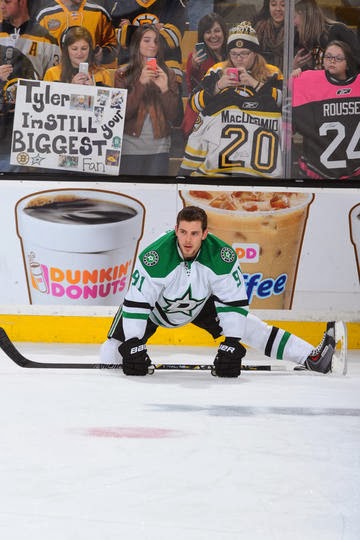 The Bruins are in Dallas and are going to see Tyler Seguin and Rich Peverley again. For Dallas fans, the few out there, it will be their first chance to see Loui Eriksson and Reilly Smith back in Dallas again.

Anyway, this game is just another chance for Bruins fans to try and sort through their feelings about the Seguin trade. It was a breakup that was not as messy as usual for Boston sports, but still pretty ugly.

1) Hey, Their Defense Sucks Too! The Bruins defense doesn't really suck. But they are in a really tight with all the injuries and Tuukka is on a cold streak. Luckily for the Bruins they are facing a team that has a crumby defense.

Dallas only anchor on defense is Trevor Daley. When he is on the ice is when the Dallas defense is at its best. If the Bruins avoid him then its a pretty easy battle against the Dallas D.

2) Horcoff Gets Hit: Shawn Horcoff decided to run his mouth about the Seguin trade yesterday. Horcoff is a respectable veteran center but after talking about the Bruins organization like he has the inside scoop, it wouldn't be surprising if he gets targeted or clocked by someone like Boychuck who destroyed James Vans Reimsdyke against Toronto.