It was a sickening and all too familiar site for Bruins fans: another player in a black and
gold sweater lying motionless on the ice, the victim of a blatant cheap shot. At 14:56 of the first period during Game 3 of the Stanley Cup Final, Vancouver Canucks defenseman Aaron Rome
delivered a devastating blindside blow to the head of a defenceless Nathan Horton as he came
across the blue line, a textbook example of a Rule 48 hit. The hit not only left Horton
unconscious, but knocked him out of the series with a concussion. And, with Vancouver up two
games to none it looked as if Horton’s injury would be the deathblow to the Bruins’ quest for the cup. Their thoughts understandably focused on the health of their teammate and friend, the
Bruins survived a scoreless period. But they quickly regrouped, motivated by the hit on Horton,
going on to take the series in seven games. Horton, as it turns out, was lucky (if it can be called luck). His symptoms were mild enough that he was able to remain a presence in the Bruins
locker room and even make the flight out to Vancouver for Game 7, where he joined his
teammates on the ice for a skate with the cup. 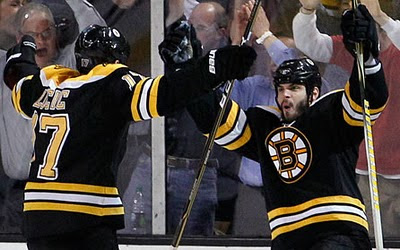 That said, Horton now joins a list of Bruins’ players with a history of concussions. This
offseason it was confirmed that Marc Savard will miss the entire 2011-12 season as he continues
to struggle with headaches and short-term memory loss associated with post-concussion
syndrome. And Patrice Bergeron, whose concussion history goes back to 2007, was forced out
of two games during the eastern conference semi-final due to a concussion he sustained after
being hit by Philly’s Claude Giroux.

Since the Savard hit, the NHL has been cracking down on headshots as concussions have
become the hot-button issue, not only in hockey, but throughout professional sports. The hit that ended Savard’s season, and the hit on Bergeron show how susceptible players with a history of concussions are to further injury. Being medically cleared to play does not mean that a player is fully recovered. Remember, Savard was cleared by doctors to play on two separate occasions despite the fact that he was clearly not playing at a hundred percent.

Whether your name is Nathan Horton, Sidney Crosby, or Raitis Ivanāns, concussions do
not discriminate. They do however, potentially end careers. The NHL is further attempting to
combat this by updating Rule 48. The new rule makes illegal “a hit resulting in contact with an
opponent’s head where the head is targeted AND the principle point of contact.” The change
to Rule 48 (also known as the Marc Savard rule) is the latest step in an ongoing attempt by
the league to increase player safety. Similarly, Hockey Canada recently launched a website
devoted to rule changes dealing with head contact at the grassroots level (hockeycanada.ca/
HeadContactRule).

At both the professional and amateur levels, the game is attempting to change the attitude
towards headshots, and what was simply referred to as “getting your bell rung.” Only a few
short years ago, it seems certain that Horton would have returned later in the series. Hockey is
filled with stories that celebrate the warrior spirit of its players who are willing to sacrifice everything to win it all. One of the most iconic images in NHL history is that of a bloody Maurice Richard shaking hands with Bruins goaltender Sugar Jim Henry after Richard came
back from a serious head injury to score the series winning goal of the 1952 Stanley Cup semi-
final. In this day and age, Richard, like Horton, would have been taken off the ice on a stretcher and then brought to hospital.

While new rules regarding player safety may not have the same flare for the dramatic, in
the case of Horton, the new approach may have saved his career. Horton has seemingly made a
full recovery and reported to Bruins camp symptom free. During the summer he wisely took
some time off to rest (he was also recovering from a separated shoulder he received in Game 7
against Tampa Bay), and after experiencing no set-backs he was able to begin off-season
workouts. At Bruins camp he told reports that “I just feel like it is in the past. I haven’t eventhought about it. With what I did on the ice or the fitness testing, it hasn’t even crossed my mind.” Horton is ready to move on and put the concussion behind him, but that is easier said
than done. He has participated in every practice thus far, but by his own admission the rugged
forward has seen little contact and has not yet dressed for a pre-season game. But Horton insists that this is not due to any lingering symptoms; rather, the team is not taking any unnecessary chances by bringing him back too soon. “Obviously I want to get back” said Horton. “I'm here, I want to play. But it's nice to ease my way back into it and get back into things.” Welcome back, Horty, take all the time you need. Click here to purchase tickets to any of the Bruins sure to be exciting home games at the Garden.
[endtext]