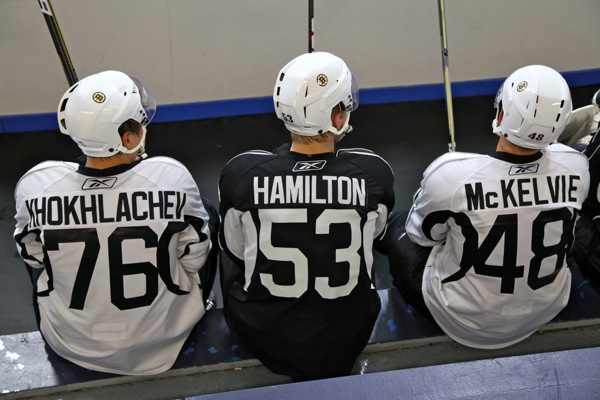 With a 3-2 victory over the New York Islanders last Saturday, the Bruins ended the 2011
NHL pre-season on a winning note. Boston finished the six game exhibition schedule going 4-1-
1, and, while that doesn’t really mean anything, I suppose it’s better than finishing 1-1-4.
Throughout, Coach Claude Julien and GM Peter Chiarelli undertook the process of whittling
down the roster in order to get to the 23 who will start opening night. As expected, 2011 draft
picks Dougie Hamilton, Alexander Khokhlachev, and Anthony Camara were assigned back to
their respective junior teams. Joining them were 2010 picks Jared Knight and Ryan Spooner. 25
others were placed on waivers and then sent down to Providence. The last cut made before the
October 5th deadline was veteran forward Chris Clark. Clark was released by the Bruins after
being invited to camp on a try-out basis. Julien said that releasing Clark was “A tough call,” and
that 35 year old “can still play in the NHL.”

The B’s were fortunate throughout camp in avoiding losing anyone to significant injury.
Defenseman Steven Kampfer suffered a left knee injury which an MRI revealed to be only a
sprained MCL. Kampfer got his skate caught in a rut and fell awkwardly after taking a hit from
Ottawa’s Jared Cowen. He is expected to miss 2-4 weeks and has been placed on the injured
reserve list. Kampfer is returning from a season-ending injury to his other knee which happened
late last season while he was playing in Providence. His injury opens the door for his friend and
P-Bruins teammate Matt Bartkowski to step in to the number seven defensive spot The B’s lone
heart-in-the-throat moment came after captain Zdeno Chara took a shot off the inside of his knee
during practice. Fortunately, it was not serious (diagnosed as a contusion) and after a day off
Zee was in the line-up for the B’s second pre-season game. The most positive sign on the injury
front was the return of Nathan Horton. Horton had a pair of helpers in his first game back, a 7-3
rout of Montreal, and will be ready to go on opening night. Backup goaltender Tuukka Rask has
bounced back from off-season surgery he had to repair a torn meniscus in his right knee, playing
in two full games and feeling no ill effects.

As mentioned above, it is difficult to make any on-ice assessments during the pre-season.
However, one encouraging sign was the Bruins power play. The B’s actually had some success,
scoring six times with the man advantage. One can only pray that this trend continues as the
team heads into the regular season.

When the pre-season wrapped, the team headed to Maine for a teambuilding retreat
similar to what they did last season when the team was in Prague. Coach Julien believed that it
helped in bringing the guys together last season and that these retreats help to form a tight-knit
group both on and off the ice. On Tuesday, the team received their championship rings and
spent some time re-connecting with old friends Michael Ryder and Mark Recchi. The Bruins
announced that the “A” vacated by Recchi will be shared between Andrew Ference and Chris
Kelley. Ference will wear it for home games and Kelley will wear it on the road for the first half
of the season and then the two will swap after the all-star break.

The Bruins have one final ceremony to go, raising the Stanley Cup banner to the rafters
of the Garden before their title defense officially begins. The keepers of the crown on opening
night will be:

Goaltenders: Tuukka Rask, Tim Thomas.
And the champs will have to be ready, because when the puck drops on the 2011-12 season,
the spoked-B crested on the sweater of every Bruin will look like a giant target to the rest of the
league. Well, to quote the 43rd President of the United States, “Bring ‘em on.”[endtext]