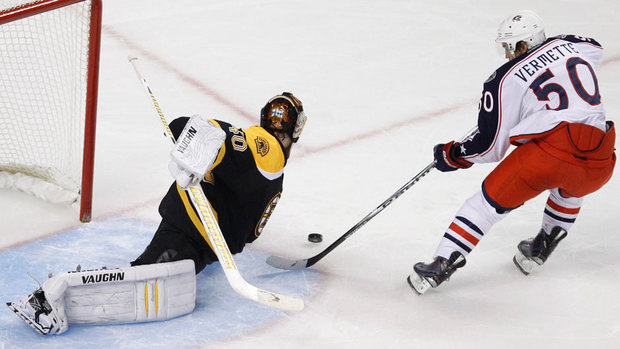 It sure wasn’t pretty. In fact, it was downright ugly. The Bruins escaped last night with a 2-1 shootout win, outlasting the Columbus Blue Jackets, and extending their winning streak to seven games. Admittedly, it was a game that even the Bruins confessed they didn’t deserve to win. Even though the only Bruin officially scratched from lineup was Johnny Boychuk, it looked as if most of the Bruins decided that they would also take the night off, save Tuukka Rask, who played his best game of the season, stealing victory from the jaws of defeat. In a night where sixty-five minutes wasn’t enough to decide a winner, David Krejci played the hero in the shootout, mercifully ending a terrible hockey game, and sending the fans home with at least some of their money’s worth. Boston’s lone goal in regulation came in the second period off the stick of defenseman Adam McQuaid, his first of the season. McQuaid, a former Blue Jackets prospect, floated a wrister from the point which found its way through the traffic in front of Columbus goaltender Curtis Sanford, tying the score just a minute thirty-five after the Jackets had taken the lead on the powerplay. Boston’s penalty killers have allowed powerplay goals in four straight games, something that they need to improve upon going forward. The Bruins were 0-2 in their time with the mad advantage, which included an extended four on three in overtime that saw the B’s come within inches of ending it when Zdeno Chara launched a missile off the pipe. A boarding call on Andrew Ference left the Bruins shorthanded to end the extra frame, but Tuukka Rask made sure the game went to a shootout, denying Jeff Carter twice on the doorstop in the dying seconds. After Rich Peverley and Mark Letestu traded shootout goals, Krejci potted the winner, getting Sanford to commit to the pokecheck before finishing high glove side. Rask capped off his night by shutting the door on Antoine Vermette, lifting Boston to their seventh consecutive win. Rask has now won his last three starts after beginning 0-3. The Bruins improve to 2-0 in shootouts, an area in which they had little success last season. 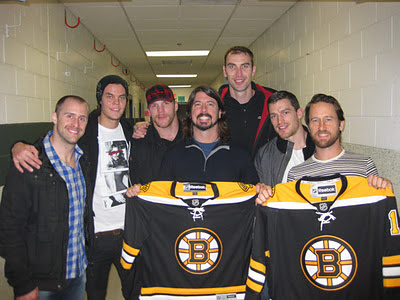 Despite coming in with a league-worst seven points, Columbus gave the Bruins all they could handle. They outworked Boston all night long, forcing turnovers, and winning the majority of the battles. But these proved to be Pyrrhic victories, as in the end, the Bruins won the war. It was hard to tell if the Bruins were tired or just disinterested in their opponent, expecting an easy win in what quickly became almost a dictionary definition of a trap game. It wasn’t that all the Bruins were off of their game, but as Ference said, “If there are fifteen guys that are feeling great and five that aren’t, it slows everybody down … and it kind of brings the whole game down.” Perhaps the reasoning behind Boston’s poor performance lies with the five or so players who spent the night before hanging out/partying with the Foo Fighters. But, as much as I’d love to place the blame on David Grohl, I think that the real explanation is also the simplest one: a hot team riding a winning streak got a little cocky, and took their opponent too lightly. The players, to a man, know they got away with one, and that they are lucky to be coming away with two points. Hopefully they have learned their lesson, and we won’t see a repeat performance Saturday night when the team travels to Long Island to face Jonathan Tavares and the New York Islanders.