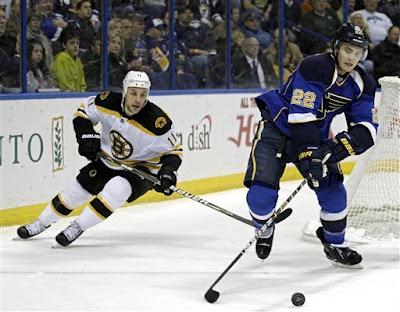 The Bruins came into tonight’s match-up against the St. Louis Blues looking for anything that would give the team a much-needed spark. The Bruins have struggled over the month of February, being shutout four times and losing three out of their last four. However, they were not playing the old St. Louis Blues, a team that has struggled over the past few seasons. Instead, the Blues have surprised many people by becoming a major contender in the Western Conference.

The Bruins got their spark early by an unassisted Brad Marchand goal. Marchand kept up his pressure on a Blues breakout and was rewarded with a turnover that ended up behind Brian Elliott. Bruins defenseman Adam McQuaid would keep the energy flowing in the Bruins favor on the next shift by roughing it up with B.J. Crombeen. Four minutes later, Lucic tipped in a Corvo blast from the blue line and gave the Bruins a 2-0 lead.

St. Louis wasted no time in responding, scoring two quick goals of their own. At the 7:17 mark Chris Stewart netted his 12th goal of the season by slamming a bouncing puck past a confused Tim Thomas. Ryan Reaves would tie the game up five minutes later by snapping a shot from the side of the circle off of Thomas’ shoulder.

Chris Kelly, who was flanked by Lucic and Krejci for this game, would give the Bruins the lead for good with under a minute to play in the period. Boychuck kept in a clearing attempt at the point, sent a pass to Lucic along the boards, who hit a streaking Kelly in the slot for his 15th of the season.

The Blues dominated the second period. They controlled the tempo, shots, and scoring chances. The Bruins did come close, however, when Boychuck’s blast appeared to find its way behind Elliott. Referee Wes McCauley would review the play before ruling it a no-goal.
Boston would pull away late in the third. Marchand netted his second of the game, off of a nice feed from Tyler Seguin, on a breakaway, beating Elliott five-hole.

The Bruins continue their road trip on Friday when they visit the Buffalo Sabres at 7:30.

NOTES:
This was the first NHL game of Bruins forward Carter Camper’s career. Camper leads the Providence Bruins with 38 points in 53 games.

McQuaid’s joust with Crombeen was his 6th fighting major of the season.

This is St. Louis’ first loss to an Easter Conference opponent this season.