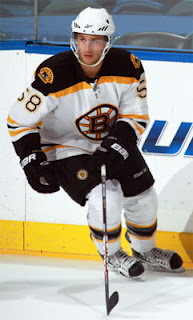 With the recent injuries plaguing the Bruins, Boston’s front office has been forced to experiment with a variety of different players from their AHL affiliate, the Providence Bruins.  Names such as Caron, Hamill, and Kampfer have frequently been listed on the B’s roster this season, but are they the answer that Chiarelli and Julien are hoping for? As of late, none of the players recalled from Providence have had a lasting impact on this team, something that Bruins management is desperately looking for. However, one player in particular, recently recalled Carter Camper, may offer some hope to the nightly line-up. Signed as a free agent in 2011, Camper found his niche on the Providence Bruins, putting up 14 goals and 24 assists in only 53 games. Although he does not carry the stigma of a Steven Stamkos or a Jonathan Toews, Camper could be a nice fit for this Bruins team at this point in the season.

A defensively minded center, Camper has the skill to put the puck in the net as well as the ability to shut down big name scorers; exactly the type of player upon which this team is built. After all, the acquisitions of Peverley and Kelly last year were not meant to be season changing additions, but they quickly rose to stardom through their combination of skill, work ethic and intensity.  This is exactly the type of player the Bruins need right now, as they have made it clear they are not going to be making any big name trades. They passed on Columbus’ Rick Nash, and have not made any legitimate efforts to land another NHL superstar, and why should they?


With Dougie Hamilton on reserve as their next big defensemen, and plenty of potential with the team as it is, the best thing for the Bruins right now is to promote from within. This would negate any reason for Chirelli to risk another Kaberle- type trade, where the B’s dealt away quality players and future draft picks for a washed up former star. So for now, Camper is the best solution to the Bruins problems. His successes in Providence reveal that he has the ability to both perform and produce at the top level. His past has shown that he can grind along the boards, win critical face-offs (5/8 face-offs against St. Louis) and put up big points when it counts.  So is Camper the final piece to this Bruins puzzle?

At this point only time will tell. At 5 ’9 173 lbs he’s not going to be making any highlight reel hits or take down any big players, but his ability to work hard, capitalize on opportunities and bring a new outlook to the game is exactly the type of play that is going to force Julien to keep him in Boston. So as for tonight, as long as we see Camper doing the small things, the minute details of the game on which the Bruins pride themselves, he will find a place in this system, and maybe say goodbye to Providence once and for all.