Shawn Thornton let the bomb go from the high slot. Gregory Campbell got a blade on it to direct it past Jonas Enroth and once again the Bruins fourth line lit the spark that ignited the Bruins to an impressive 3-1 win over the surging Buffalo Sabres last night. Whether it is a momentum changing fight, a scrappy goal, or a tenacious fore-check this fourth line rarely disappoints.  They are arguably the best fourth line in all of the NHL and the most valuable to their team. 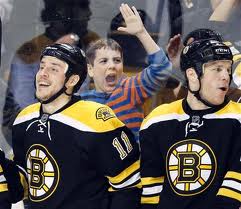 The rest of the Bruins seized the momentum that Campbell, Thornton and MacDermid created and had another solid third period to record the win and gain the all important two points. Tim Thomas didn't need to make many saves but the ones he made were as timely as they come. He kept his team within striking distance, which is what you need your goaltender to do in close contests.

The third period featured the Bruins bringing their physical play up several notches. Johnny Boychuck laid out Thomas Vanek to set the tone while Dennis Seidenberg (aka The German Hammer) was a man possessed throwing his body at everything that moved through the neutral zone. This is when the Bruins are at their best. They take games over when they throw caution to the wind and start body checking with severe intensity. They intimidate their adversaries with the threat of the huge hit.  The Sabres, who played the night before, could not match the brute force of the Black and Gold and as a result had trouble moving the puck up the ice. Boychuck and Krecji scored highlight reel goals and the Big Bad Bruins seemed to have returned to the TD Garden. It was the fourth line that brought them back.