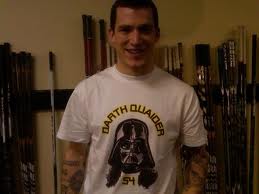 Last night the Bruins lost in the shoot out to the desperate Washington Capitals. The B’s did well to get a point with a late goal from Andrew Ference.  However a dark cloud hangs over this game as solid defensemen Adam McQuaid was injured on a punishing hit by Jason Chimera. Chimera was tossed from the game and the Bruins went on a five minute power play.  The man advantage has been a sore spot for the Bruins and once again it let them down, as they only recorded 3 shots on net during the five minute extra man situation.  It turned out to be their only power play during the game and once again it was a huge opportunity lost by the Bruins. 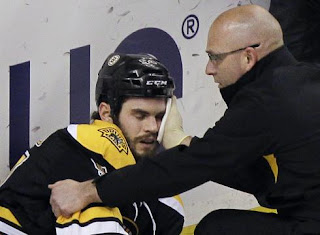 As for the hit, it most certainly was a charge, as Chimera came all the way from the Capitals bench and drilled Darth Quaider. The prevailing question is, was it a hit from behind? I would venture to say it was not as McQuaid turned just as Chimera came in to make his contact.  As McQuaid turned the impact thrust him into the boards and it looked like his head hit the dasher.  McQuaid, by turning, put himself into a vulnerable position and paid the price.  The officials made the appropriate call based on the rules and the injury that resulted.
This hit could have been completely avoided if the NHL looked at its rules and allowed a little interference to be run on Chimera before he flies in and delivers his blow. Rich Peverley was in the area and could have slid in front of Chimera to impede his progress and save his teammate from getting lambasted.  However, if Peverley employed that tactic, he would have been guilty of interference and sent to the box for two minutes.  This is a prime example of the situation the NHL rules committee needs to take a look at so plays like this can be avoided.
As for McQuaid, Bruins fans better hope he is not severely injured.  On top of having the best hair cut on the Bruins team, he is also an extremely valuable player. He brings a ton of toughness to the lineup and plays a very sound stay at home style of defense.  Since joining the Bruins in 2009 he has improved each year and become a real main stay on the blue line. He is also one of those character type of guys that really brings a team together. Who else would allow their lettuce to be cut into the world’s most famous mullet season after season. This guys is a team builder and very underrated hockey player. Let’s hope he gets back in the line up sooner rather than later as the Bruins will need him in difficult and physical playoffs series.
by Kirk R Douglas (@Kd136Kirk)