Tim Thomas: Facing Shots On and Off the Ice

It was an interesting season for the Boston Bruins, with a fair share of supremely high ups, and periods of cumbersome downs.  Most interesting of all topics revolving around the team this winter and spring, has to be the peculiar events surrounding goaltender Tim Thomas.  It was at this time last year when this man was considered to be having one of the best performances of all time, by highly regarded observers of the game.  However, less than a year later, a good portion of local media and fans consider him "unlikable."  Yet again, the masses are proposing that the best move would be to deal this guy immediately, even after he's proved time and time again that he isn't a man to count out.  Let's take a look back at how the man that brought Lord Stanley back to Boston, has now found himself banished again, by a segmented crowd that didn't ever seem to willingly accept him in the first place. 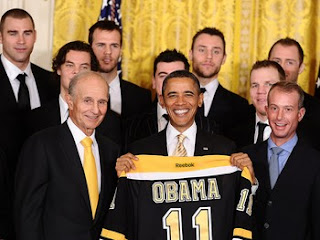 Those reading this already know where the story starts, because even if one were living in solidarity, out in the wilderness somewhere, they would have still heard about Tim Thomas' decision not to visit the White House.  Any Bruins follower can remember this day vividly out of everything that occurred during the regular season.  It was like a whirlwind of social media and water-cooler chat, that just slammed one in the face repeatedly with very opinionated comments about the man.  Heck, even those that weren't frequent observers of Bruins hockey had something to say about Tim Thomas on that day.  But, it was those that had always felt a tinge of disapproval toward Tim Thomas that spoke the loudest. 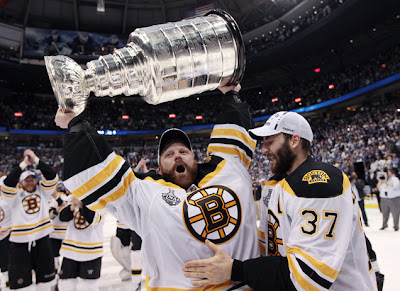 Two concepts regarding this incident quickly emerged as the most highly touted reasons Thomas' decision had had a negative impact on the team.  One common opinion was that of the White House visit being a team bonding experience.  First off, I'm not sure what could be a better bonding experience than leading your team through the blood, sweat, and grueling efforts of the NHL playoffs.  I think it's safe to say that the guys invited to the nation's capital that day, already knew Tim Thomas pretty well.  This was somewhat of the final chapter for the team of last season.  They had already experienced the orchestrated bonding expeditions, such as the trip to Prague to start the year.  The White House visit is more or less of a cap on something that has already reached its own special conclusion.  Everyone on that team had already sacrificed for the means of victory, and there was nothing left to prove to each other in that regard.

Another loud theory that has been proposed, is that Tim Thomas put himself before the team, and used the moment as a pedestal to promote his own beliefs.  What he did was stand by a deep-rooted mentality, that went far beyond stopping pucks.  Thomas stayed true to the values he's passionate about, which is the kind of action that this very nation had been founded on.  Yet many felt the need to criticize such a decision, as if the players in that locker room would constantly begrudge Thomas for having made it.  Andrew Ference prefers not to use a motor vehicle as transportation, but it doesn't mean that every truck owner on the team doesn't get along with the guy.  Personal beliefs are just that - personal.  At an event outside the game of hockey, such as visiting a political figure, these beliefs are very much in play.  It doesn't mean that a player thinks he's more important, it just means that under all the pads lies a human being - which can be a shocking reality for some. 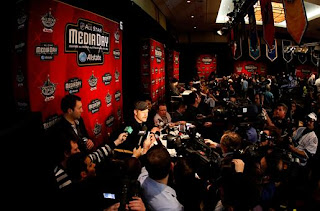 The White House occurrence only seemed to be the tip of the iceberg.  After this incident, it was clear that Tim Thomas was going to be intensely scrutinized for the remainder of his tenure in this city.  Thomas was constantly surrounded by dozens of microphones, held by reporters just chomping at the bit to capture a sound-byte they could question and spin into negative assumptions.  Each week a new Thomas statement "surely proved that his head wasn't in the game."  There was the comment about the lights at the Madison Square Garden, that immediately became highlighted as an excuse Thomas was making for his play.  There were times when people would watch intently after a victory, observing which players went toward the goal-scorer and which went toward Thomas, using the sequence as support for the assertion that Thomas did not get along with certain teammates.  Even more assumptions were made when Thomas used the word "they" instead of "we" when referring to the teammates playing in front of him.  It's gotten to the point where Tim Thomas can't be anything short of perfect or silent in order to keep the anticipating critics hushed, and that's a shame.

They say that people will see what they want to see, and if one looks hard enough for something, they'll be sure to find it somehow.  This may be the case for the attention that continues to revolve around Tim Thomas.  It could be that some very knowledgeable people still have a bad taste in their mouths, for having been dead wrong about this man's capabilities.  It could be that there's simply nothing better to write and talk about.  One thing that is certain, is that this man will never escape the reach of those trying to tear him down.  It's a lifestyle that Tim Thomas has battled throughout his entire career, and it will apparently remain the same right up until his time in Boston has concluded.  Two Vezina trophies, a Conn Smythe and a Stanley Cup didn't possess the power to change it, so chances are, nothing ever will. 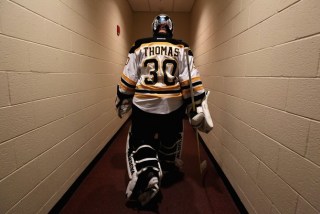