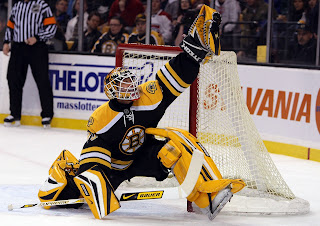 ESPN Boston-
In a radio interview Monday on WEEI, Bruins principal and alternate governor Charlie Jacobs weighed in on goalie Tim Thomas, whose decision to forgo his final season of his contract and leave the Bruins hanging with a $5 million cap hit remains a hot topic.

Jacobs, the son of owner Jeremy Jacobs, expressed confidence that the Bruins will be able to unload Thomas in a trade despite his intention to sit out the 2012-13 season.

"Timmy's going to do what he wants to do, and you know what? I bet we'll get something for him if he elects not to come back," Charlie Jacobs told WEEI. "And there is in fact a floor for the salary cap this upcoming season, I can see teams trading for that $5 million cap [hit] to bring their team up to the floor."


I do believe the Bruins can get rid of Thomas sometime this season or during the off season, but the real question is what would the Bruins get in return? Would a team be willing to deal one of their players for a goalie who is taking a year off at the age of 38?

At most the Bruins would probably receive a second round draft pick, unless the trade partner is that desperate and ships one of their position players or a first rounder.

I do believe Thomas has some game in him, but not much. Age is creeping up on him and I don't think he will be as good as he was during the 2011 run for the cup, but who knows he could could come back and play very well. Either way, I say the Bruins do what ever they can to ship him and start the new era with the young net minders.

What do Bruins fans think?