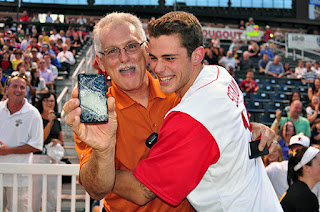 CBS Boston Sports-
Seguin’s speed dating event at the Lowell Spinner’s game Wednesday night nearly went off without a hitch, until the Bruins’ young star almost took a foul ball off the back of the head.
Luckily for Seguin — and the entire Bruins’ organization – Spinners vice president Dan Beaulieu was there to make the save which will rival those made by Tim Thomas during the 2011 Stanley Cup run.

According to CBS Boston, Tyler Seguin almost got hit in the back of the head on a foul ball while doing a speed dating promotion at the Lowell Spinners game last night. Thank you Dan Beaulieu for sacrificing your phone for Tyler. If we lost Tyler to a concussion or other head injury the Bruins would probably be doomed. Tyler is the key piece to the Bruins success this season and the Bruins need him at top form. Thank God Tyler or nobody else wasn't hurt by the foul ball. Less than two months until the regular season.

You can watch Dan Beaulieu and Tyler here Bruins