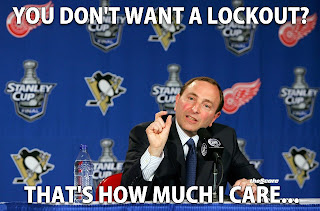 NHL- NEW YORK -- The National Hockey League announced today the cancellation of the 2012-13 regular-season schedule through October 24. A total of 82 regular-season games were scheduled for Oct. 11 through Oct. 24.

The cancellation was necessary because of the absence of a Collective Bargaining Agreement between the NHL Players' Association and the NHL.

Well this is just what we wanted... A week ago I thought maybe the NHL and NHLPA would come to their senses and come to terms before next week, well I was wrong.

It sucks that this is what the NHL has come down to, a bunch of greedy billionaires and millionaires arguing about money. Why? Because the rich want to get richer.

We should be wrapping up the preseason and instead we are delaying the season even further. Nothing else can be said except the NHL and NHLPA need to suck it up and get something done soon!

As always we will keep you updated on any updates on the lockout and will also update you on how the Bruins players are doing across the pond.