Keys to the Game Vs. Devils

The Bruins are home tonight against the defending Eastern Conference Champion New Jersey Devils just after playing last night against the Carolina Hurrricanes. The Bruins beat the Hurricanes 5-3, Seguin had an empty netter at the end of the game. Now the Bruins will have to face the Devils. The Devils, like the Bruins, have not yet lost in regulation. The Devils are 3-0-1 coming off of a overtime loss to the Montreal Canadians.

During the off season the Devils lost forward Zach Parise who signed with the Minnesota Wild. It was a big loss for the Devils but the Devils are doing great so far in part due to their defensive mind set and solid goal tending from Marty Brodeur. The Devils top forward Ilya Kovalchuck has 5 points, 2 goals and 3 assists, in the four games the Devils have played. The Bruins have not had huge problems with Kovalchuck in the past but he's a speedy slippery player who could score on any shift.

1) Defense Vs. Defense. The Devils are a notoriously great defensive team and are as just as deep as the Bruins at the position. They also have great two way forwards such as Travis Zajac, Dainius Zubrus, and Patrik Elias. After getting through the defense men and back checking forwards there is Martin Brodeur in net who has a great 1.69 goals against average. The Bruins will need to be patient and can't get frustrated if they want to put the puck in the net. 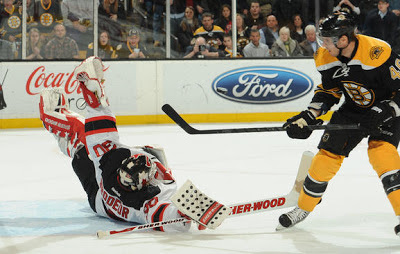 2) Short and Sweet. The Bruins are coming off of a game just last night. Tuukka Rask and Adam McQuaid are rested but the rest of the team isn't. Playing back to back games this early in a shortened season could result in an injury, mainly a pulled groin, which is why the Bruins will have to keep the shifts short in order to sustain their energy. The Bruins will have to play the Buffalo Sabers Thursday night which means the Bruins will have to especially conserve energy for the game against the Sabers who have "so much to prove" and are all of a sudden tough and powerful after only adding Steve Ott and John Scott.

Tonight will be a great game matching that of the over time loss to the Rangers. Hopefully though in this spectacle of amazing hockey, the outcome will be different then last.