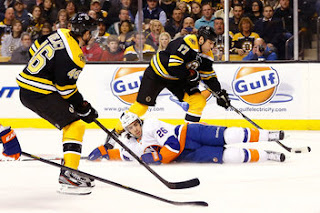 Long Island, New York. The Bruins wrapped up their 5 game road trip with a 4-1 win over the New York Islanders.

Adam McQuaid opened the scoreboard with one of his own off of a slap shot assisted by Tyler Seguin. Brad Marchand struck again after an Andrew Ference shot got redirected to him. David Krejci finished a spectacular play, and Gregory Campbell added an empty netter. Goal tender Tuukka Rask was huge on a number of occasions, especially right after the Bruins first strike, stuffing Islanders' Michael Grabner's breakaway with a beautiful pad save, and finished the contest with 36 saves.

For the Islanders, Casey Cizikias scored the lone goal after Patrice Bergeron lost the offensive zone face off, the Islanders brought the puck into the Bruins zone as Josh Bailey streaked to the net. Tuukka went down thinking Bailey would fire, but he dished the puck off to Cizikias who lofted it over the vulnerable Rask.
Highlight of the night was on the third goal. Zdeno Chara played a puck from out of the defensive zone feeding Horton streaking down the wing. Horton fed a streaking Milan Lucic who then fed a wide open David Krejci on the other wing who roofed the puck into the net, one of the best displays of offense all season.

The penalty kill was perfect again going 3 for 3, but the powerplay was still unnoticeable as they went 0 for 4. The Bruins played great defense keeping young stud John Tavares off the score sheet.

All in all the Bruins did what they needed to do, beat the inferior team. The next go at it Thursday night versus a depleted Ottawa team who is playing good hockey despite loosing two of their best players in Jason Spezza and Erik Karlsson.