Bruins schedule to pick up 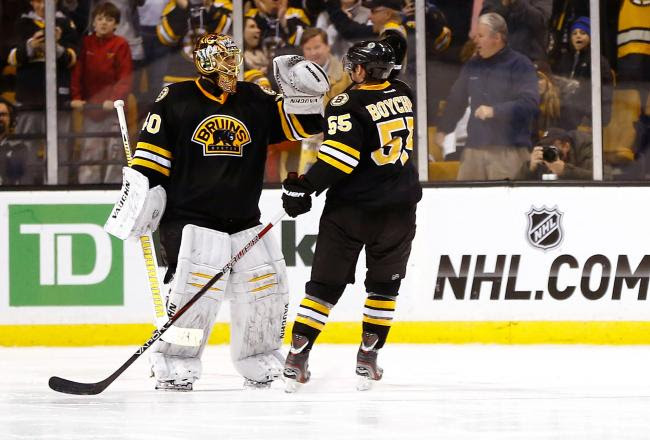 As of now, the Bruins have the least amount of games played in the National Hockey League, seventeen. Even so, the B's currently have the second most point total in the Eastern Conference (behind only Montreal, who has 3 more games played, and is a mere point ahead of Boston). They also stack up at fourth in the league, tallying seven points behind Chicago (19 games played), and a single point behind Anaheim and Montreal (with eighteen and twenty games played, respectively). The fact that the Bruins have been able to play so well, and rank so high considering their current game total, is outstanding. But this is where the schedule picks up. Starting last Sunday, the Bruins will play at least every other day for the remainder of the season, with the exception of a single two day break the B's have toward the end of March (assuming mother nature doesn't want the Bruins to have more time off). Plus, the Bruins have a few back to back games throughout the lengthy stretch. While the crowded hockey schedule will make up for the Bruins in the games played category, the B's have to make sure they practice and work appropriately so as to not tire themselves out. It's very important to be on your game and full of energy every night in the NHL, especially with the body bruising style of play the Bruins are famous for. This shouldn't be too much of a problem, especially with Claude Julien behind the bench. To put it into quicker terms, the Bruins need to keep up their game, but with a more tightly packed schedule. Naturally, us fans love it. You shouldn't have to worry about a lack of hockey anytime soon. sources: http://bruins.nhl.com/club/calendar.htm?date=3/1/2013, http://www.nhl.com/ice/standings.htm?season=20122013&type=LEA, http://img.bleacherreport.net/img/images/photos/002/127/330/hi-res-159842319_crop_exact.jpg?w=650&h=440&q=75