Keys to The Game Vs. Buffalo

After a Big Bad Blizzard rocked the Northeast the Big Bad Bruins now have to rock the Buffalo Sabres. The two division rivals already faced once this year in a game that did not go well for the defensively minded Bruins. The Sabres scored 7 goals on the Bruins, one an empty net goal, against the Bruins who put up four goals themselves. The Bruins weren't only beat on the score board but also beat, literally, in the physical aspect of the game. Fan favorite and tough guy Shawn Thornton was beaten badly by goon John Scott and got a concussion. Thornton returns to the line up tonight but was advised by Mike Milbury repeatedly on CSNNE's new show Cross Check not to fight Scott again. Milbury repeatedly said Scott is a goon who cant do anything except fight (see the video here). Milbury said Thronton should just flash his ring at him and then skate around him. Either way the Bruins will have to smarten up and toughen up to win this game.

1) Focus on the Forwards. The Buffalo Sabres have great forwards on their team and a few years ago it looked liked they had the right defense men to match. But over time Tyler Myers hasn't lived up to expectations and Robyn Regehr hasn't been himself since he left Calgary. Christian Ehrnhoff is the only Buffalo acquisition to live up to expectations. The Bruins should focus on the forwards becuase they're the only ones who can do the scoring and the intimidating.

2) Intimidate the D-Men. Because Buffalo's defense is already weak if the Bruins can intimidate them and impose their strength then the Bruins will have an easier time getting to the net and Ryan Miller. If Tyler Myers ever starts to turn it on again he could be a very scary player which is why the Bruins need to make sure they shut him down and keep it that way. 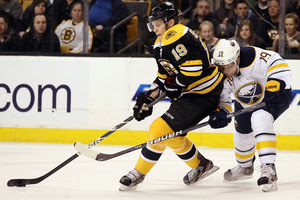